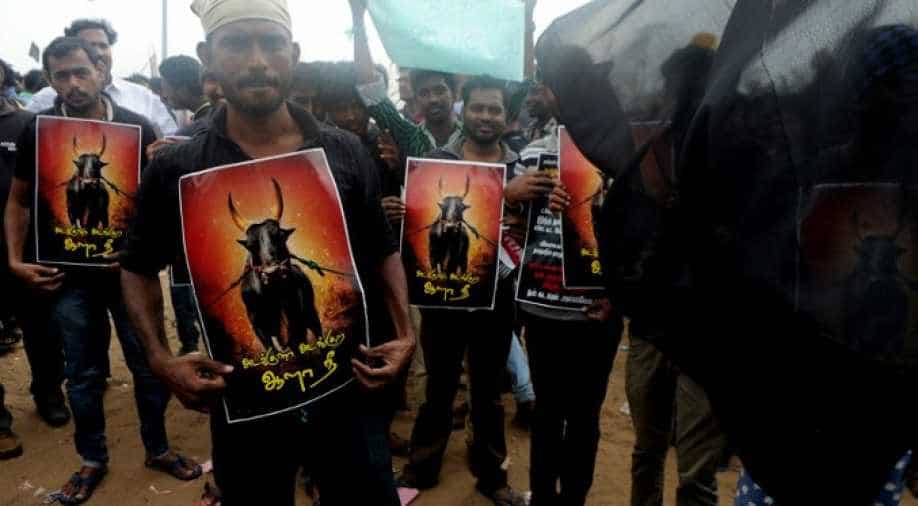 Tamil Nadu chief minister O Panneerselvam, who had on Saturday said he would inaugurate the event at Alanganallur, is now expected to do so in Dindigul district. Photograph:( AFP )

Two people have died and dozens injured during a Jallikattu event in Pudukottai district in India's southern state of Tamil Nadu.

The people injured during the incident were discharged after providing first-aid, according to the Press Trust of India.

Earlier in the day, Tamil Nadu chief minister O Panneerselvam was to inaugurate the Alanganallur Jallikattu today but that was not to be with organisers there refusing to conduct the bull-taming sport.

The organisers said they wanted a "permanent solution", not the ordinance promulgated on Saturday by the state government, allowing the holding of the sport in the state for six months.

To press home their point, the residents of Alanganallur in Madurai district blocked all entry points into the village. And organisers removed all bulls from the local arena.

But the sport -- in which groups of men face off with a bull in an open field, and try to grab hold of the hump on its back -- was held in other parts of the state.

PTI reported that Jallikattu was held in Tiruchirappalli district with traditional fervour.

In Manapparai in Tiruchirappali district, it said thousands witnessed the event as bulls roared out into the sporting arena.

Youths tried to hold on to their humps for a brief distance as the animals sped towards the exit.

Hundreds of bulls and youths participated in the show. The owners of winning animals and youngsters were awarded prize money.

"Manjuvirattu", another form of jallikattu , was reported from villages in Dharmpauri district.

It is Alanganallur however which is famous for the sport, and the only place in the state where the sport is conducted as an official function. So holding it there would mean the sport has "officially" started in the state.

Jallikattu was banned in 2014 by the Supreme Court.

Agitators were told that the ordinance will be replaced by a law. That a bill will be introduced in the state assembly and passed into law, making for a permanent solution.

As for Panneerselvam, he is now expected to inaugurate the Jallikattu in neighbouring Dindigul district.