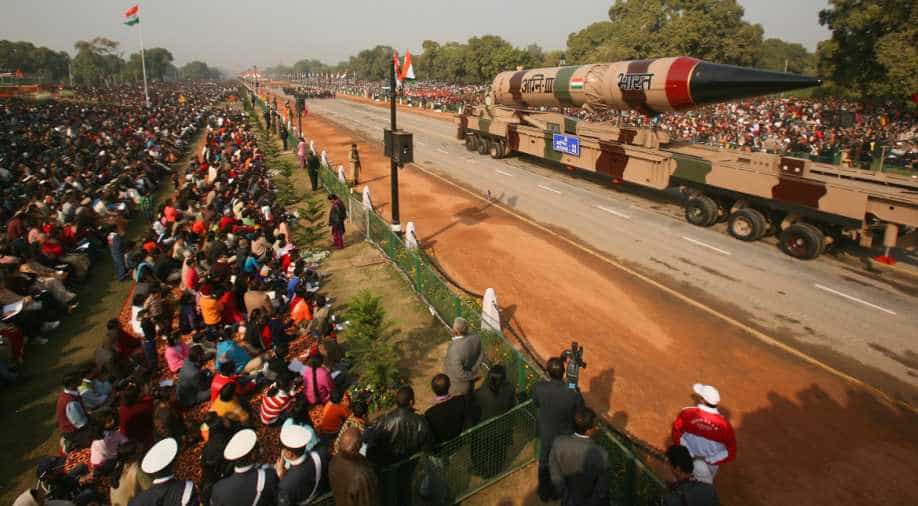 Nearly 60,000 security personnel drawn from Delhi Police and central security forces have been deployed in central Delhi. In photo: An Agni III nuclear-capable missile is paraded during the Republic Day Parade on January 26, 2009. Photograph:( Getty )

The national capital was today wrapped in an unprecedented security cover with thousands of security force personnel keeping a hawk-eye vigil to ward off any terror strike or untoward incident during India's 68th Republic Day celebrations.

Mobile hit teams, anti-aircraft guns and sharpshooters were deployed to keep a watch on the eight-kilometre-long parade route from Rajpath to Red Fort besides nearby localities.

There were intelligence inputs that terror groups may try to carry out attacks. Delhi Police was sent a special advisory informing them that terror groups might use animals to target crowded areas like important installations, railway stations, etc to create a panic.

As per earlier intelligence inputs, terror groups like LeT may be planning to use helicopter charter services and charter flights to launch attacks.

Snipers were on top of high-rise buildings while around scores of CCTV cameras kept a tight vigil on people's movements on the parade route.

Elaborate air defence measures, including the deployment of anti-aircraft guns, were also put in place to secure the air space.

Security personnel identified vulnerable spots like crowded markets, railway stations, bus stands and other high-value establishments and efforts were made to secure them. Traffic police deployed around 1,500 personnel to manage route diversions during the parade.

Patrolling in public places was intensified and checking and frisking in the metro, railway stations and bus terminals tightened.