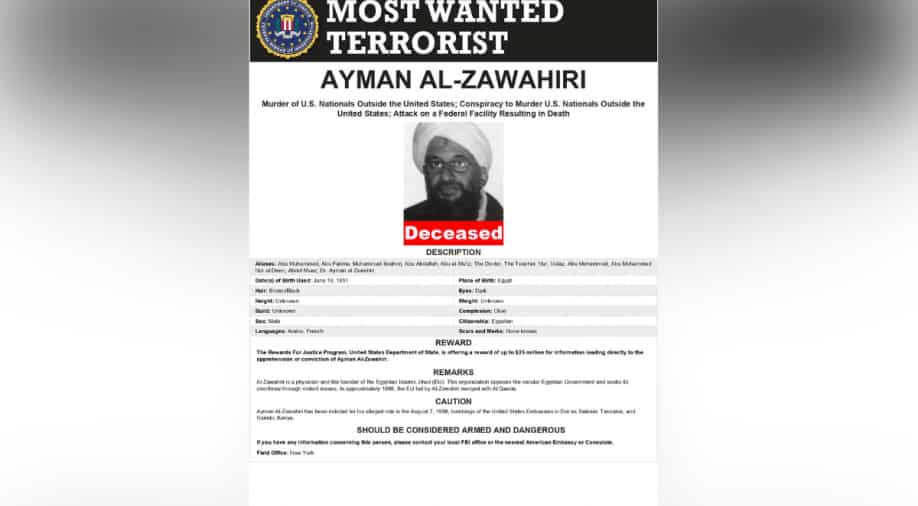 US President on Monday evening announced that the CIA had carried out the drone strike over the weekend and killed Zawahiri. He was allegedly sheltering in a safe house in Kabul city.

The Taliban have condemned the US drone strike in Kabul city over the weekend that killed al Qaeda chief Ayman al-Zawahiri.

Without naming Zawahiri, the militant organisation said that the attack goes against “international principles" and the 2020 agreement on a US troop withdrawal.

“An air strike was carried out on a residential house in Sherpur area of Kabul city. The nature of the incident was not revealed at first,” Taliban spokesman Zabihullah Mujahid said in a statement published on Twitter.

“The security and intelligence agencies of the Islamic Emirate investigated the incident and found that the attack was carried out by American drones. The Islamic Emirate of Afghanistan strongly condemns this attack on any pretext and calls it a clear violation of international principles and the Doha Agreement,” he said.

“Such actions are a repetition of the failed experiences of the past 20 years and are against the interests of the United States of America, Afghanistan and the region. Repeating such actions will damage the available opportunities,” the spokesman added.

"The Kingdom of Saudi Arabia welcomed the announcement by US President Joe Biden of the targeting and killing of the terrorist leader of Al-Qaeda Ayman Al-Zawahiri," the foreign ministry said on Tuesday.

US President on Monday evening announced that the CIA had carried out the drone strike over the weekend and killed Zawahiri.

What did Obama say?

Former US president Barack Obama on Monday welcomed the killing of al-Zawahiri.

Taking to Twitter Obama said, "More than 20 years after 9/11, one of the masterminds of that terrorist attack and Osama bin Laden's successor as the leader of al-Qaeda – Ayman al-Zawahiri – has finally been brought to justice."

"It's a tribute to President Biden's leadership, to the members of the intelligence community who have been working for decades for this moment, and to the counterterrorism professionals who were able to take al-Zawahiri out without a single civilian casualty.

"Tonight's news is also proof that it's possible to root out terrorism without being at war in Afghanistan. And I hope it provides a small measure of peace to the 9/11 families and everyone else who has suffered at the hands of al-Qaeda," the former US President added.

Australian Prime Minister Anthony Albanese said Tuesday that the thoughts of Australians were with the families of all the victims of Ayman al-Zawahri's "acts of terror".

"May they find some small solace in the knowledge that he cannot cause more grief through his acts of terror, and let terrorists see that Afghanistan will never, ever be a safe haven for their hatred, their terrorism and their attacks on our humanity," Albanese told parliament on Tuesday.

According to CNN, the US undertook "a precision counterterrorism operation" targeting Zawahiri, who was sheltering in a safehouse in Kabul, a senior administration told reporters Monday.

According to the official, "a precise tailored airstrike" using two hellfire missiles was conducted at 9:48 p.m. ET on Saturday, July 30 at 6:18 am (Kabul time), through an unmanned air strike.

It was authorised by Biden following weeks of meetings with his cabinet and key advisers. No American personnel were on the ground in Kabul at the time of the strike.

Also read | Who is Ayman al-Zawahiri, the al Qaeda chief killed by US strike?

Though clear details are yet to emerge, photos of the alleged safehouse in Kabul where Zawahiri was said to have resided emerged on social media.

Am told this was one of the homes hit. Photo of a drone shared with me, hard to confirm. @SecKermani @SYSSFZ https://t.co/OgLqYGQhTC pic.twitter.com/739piS5Gs4

WION could not independently verify the authenticity of these photos.