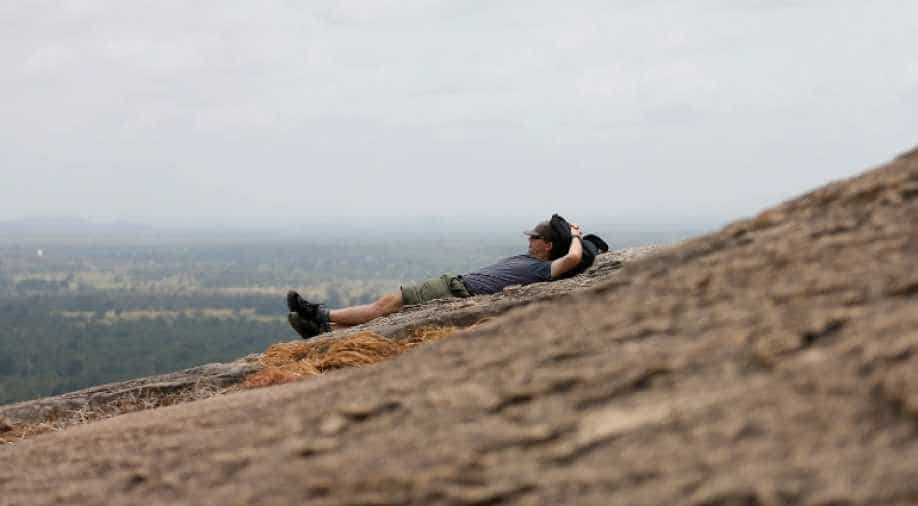 A tourist rests on top of a rock in Sigiriya, Sri Lanka. Photograph:( Reuters )

Tourism makes up about 5 per cent of the Indian Ocean island's $87-billion economy, but the president's sacking of the prime minister late in October triggered a crisis that credit rating agencies say has already hit economic prospects.

Sri Lanka's travel industry is starting to suffer the fallout of a political crisis in the middle of its peak tourist season, as uncertainty prompts cancellations by both business and leisure visitors.

Tourism makes up about 5 per cent of the Indian Ocean island's $87-billion economy, but the president's sacking of the prime minister late in October triggered a crisis that credit rating agencies say has already hit economic prospects.

"We have cancellations in the region of about 20 per cent," said Chandra Mohotti, a manager at the luxury Galle Face Hotel in the capital, Colombo, which has about 200 rooms.

"Normally our hotel would be full. We are offering discounts because of the fear that allocations will not be utilised."

Peak season for holidaymakers from Europe, a major source of tourists, along with India and China, typically runs from December to March.

But numerous flight bookings have been cancelled, especially from Europe, a source at national carrier SriLankan Airlines told Reuters.

"The crisis started just when tourists take a decision where to go," said the source, who declined to be named. "(It) has discouraged many of them."

Mahinda Rajapaksa, who replaced Ranil Wickremesinghe as prime minister, lacks a parliamentary majority and has been prevented by a court from holding office, delaying the 2019 budget and leading to violent scenes in parliament.

It may be a while before the cancellations show up in arrivals figures, however. Tourist numbers were up 16.8 per cent in November on the year, official data showed on Thursday, with visitors from Europe up 37 per cent, although numbers from China, Japan, the Middle East, and Southeast Asia all fell.

Business travel has also been hit by the crisis, with firms moving meetings to elsewhere in Southeast Asia.

"There have been some cancellations and some have shifted to Singapore and Indonesia," said Sanath Ukwatte, president of the Hotels Association of Sri Lanka, adding that conference and exhibition bookings were the worst hit.

Harith Perera, president of the Sri Lanka Association of Inbound Tour Operators, said he had also seen cancellations in the corporate sector.

"At the moment bookings have slowed down and that is a concern," he said. "If the current crisis drags on, then the impact will be significant. Cancellations are not only from European tourists but from everywhere."