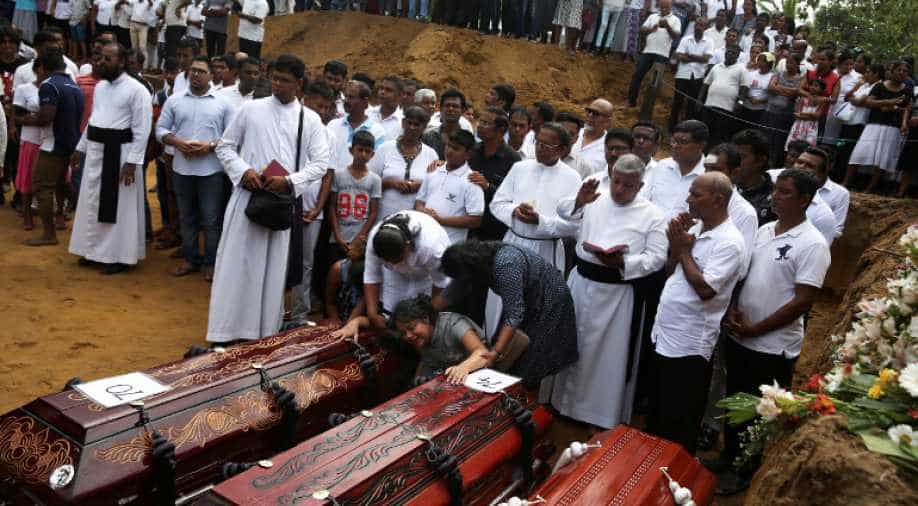 White flags and ribbons have been put up at shops, roadsides and other places in the country to mourn the loss.

Sri Lanka on Tuesday saw another day of dramatic developments in the aftermath of Sunday's terror attack that killed more than 300 people.

State Minister for Defence Ruwan Wijewardene confirmed in the Parliament that Islamist group National Thowfeeth Jamath (NTJ) was responsible for the worst terror attack in the island nation.

Speaking in the Special session of the Parliament, Wijewardene said, "National Thowfeeth Jamat group which carried out the attacks had close links with JMI, it has now been revealed"

He also said that the attacks were carried out in "retaliation" for the attacks on Mosques in New Zealand.

On Monday, Health Minister Rajitha Senaratne first confirmed that NTJ was linked to the attack.

Meanwhile, the Islamic State has claimed responsibility for the attacks via the group's Amaq news agency.

Sri Lankan Prime Minister Ranil Wickremesinghe also speaking in the Parliament said his country is now facing a different conflict and the group responsible for it is part of the 'global terror network".

Earlier in the day, mass burials happened near the St Sebastian Church in Negambo, which is one hours drive from Capital Colombo. There have been heartbreaking scenes of families breaking down as they bury there loved ones who died in the terrorist attack. CCTV footage of the bomber in of the church was also given by the locals.

White flags and ribbons have been put up at shops, roadsides and other places in the country to mourn the loss. The country has marked the national day of morning on Tuesday with flags at half mast and a minute of silence observed at 8:30am.

Tuesday was the first day of the emergency in the country. Security has been beefed up across the country especially in hotels since a number of hotels were also targetted on Sunday, out of the three hotels which were targeted, two have been closed down.

The situation remains tense in Colombo with police issuing a high alert about a lorry suspected of carrying explosives.

On Monday, WION in Colombo was just a few meters away from St Anthony's church when an explosion took place when bomb disposal units of the Special task force was trying to diffuse a bomb.

The security forces had found the suspicious van outside the church.

The authorities have now issue an advisory, that if anyone parks a car on the road, they must put their mobile number on the windscreen.