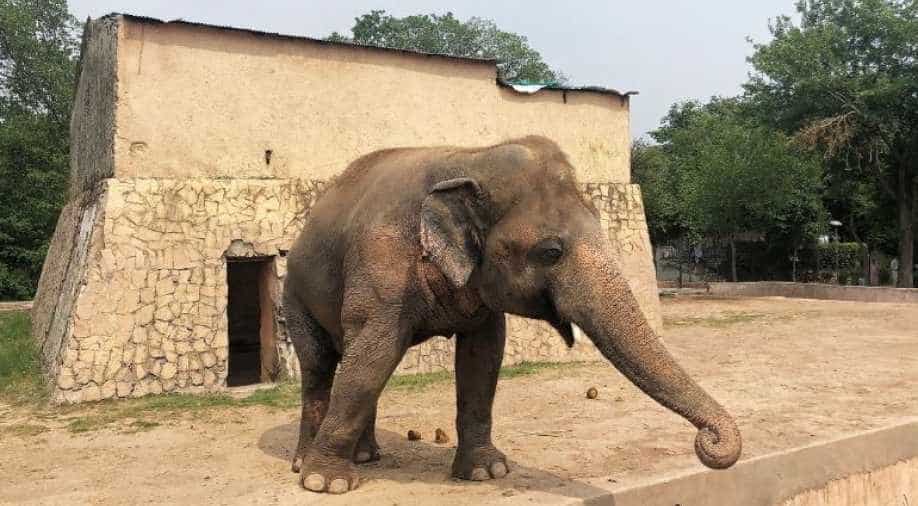 Kavaan the elephant stands at his enclosure at the Islamabad Zoo in Islamabad, Pakistan. Photograph:( Reuters )

The elephant, named Kavaan, generated international headlines for the zoo in 2016, when pop star Cher sent representatives to check on its living conditions after it had been chained for 27 of its 29 years there.

An emaciated wolf rested its head on a block of ice, seeking relief from stifling heat in a zoo in Pakistan's capital, while another gazed at a family enjoying an afternoon picnic as an elephant swayed its head nearby.

The elephant, named Kavaan, generated international headlines for the zoo in 2016, when pop star Cher sent representatives to check on its living conditions after it had been chained for 27 of its 29 years there.

Now the zoo is getting headlines again, as government agencies in Islamabad tussle over who is responsible for its management, leaving neglected animals to run short of food and clean water, with many falling sick.

"The animals are suffering in this tug-of-war between federal and local governments over the zoo," said Owais Awan, a lawyer who has gone to court to help resolve the issue.

The Islamabad High Court ordered the municipal corporation to hand management of the zoo to the Ministry of Climate Change on Friday, but a ministry official said the corporation had shut its offices and zoo management was reluctant to meet.

"The keepers of the animals are there, but not the management," ministry secretary Hassan Nasir Jamy told Reuters.

"We are sending volunteers and vets to check on the animals ... We are afraid of the animals dying."

The zoo management's refusal to talk to ministry officials, despite repeated letters and telephone calls, amounted to contempt of court, he said.

The zoo's deputy director declined to comment to Reuters and Islamabad's metropolitan corporation could not be reached.

The court called for urgent steps to save the animals from further harm, ordering immediate treatment for a Himalayan bear that was injured in a fight with another bear, zoo officials said, and also suffering a long-term skin ailment, Awan said.

"The animals have been suffering," said Sana Jamal, a spokeswoman for a group of about 40 citizens working to improve the zoo facilities.

"Whenever we have visited, there was no food and water in most of the enclosures. That's the main reason we wanted the pressurise the ministry to officially take over."

Some birds and animals died for lack of food and medication, newspapers said this year.

Asked about the conditions, one of the zoo staff told Reuters, "Everything is fine."

Nearby, crows pecked at bones littering the wolves' enclosure.