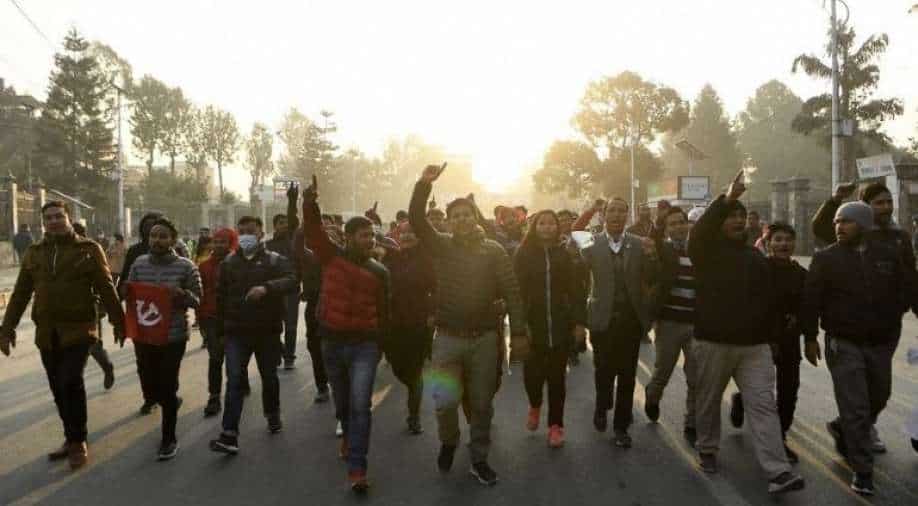 Protesters from the Nepal Communist Party chant slogans as they march during a general strike against the dissolution of the country's parliament, in Kathmandu on February 4, 2021. Photograph:( AFP )

More than 180 protesters, including a former minister, were arrested in Nepal on Thursday, police said, as a nationwide strike was staged over parliament's dissolution

More than 180 protesters, including a former minister, were arrested in Nepal on Thursday, police said, as a nationwide strike was staged over parliament's dissolution.

Tensions have been rising in the Himalayan nation since December, when Prime Minister K.P. Sharma Oli dismissed the legislature and accused members of his Communist Party of being uncooperative.

Demonstrations have since swelled, with protesters and police clashing.

The nationwide general strike was called on behalf of a faction of the ruling Communist Party by former Maoist rebel leader Pushpa Kamal Dahal, who helped Oli come to power in 2018 but has since become a critic.

"The prime minister dissolved the parliament blocking our platform to protest against his unilateral decisions," Bishnu Rijal, a leader of the Communist Party, told AFP.

"We are compelled to (take) to the street to protest against his unconstitutional move."

Offices and business districts were shuttered across the country.

Police said traffic in the capital Kathmandu had dropped sharply after protesters blocked some roads. At least 188 protesters were arrested across the country for obstruction and vandalism, a police spokesman said.

Oli, who swept to power with a two-thirds majority, has called for new elections in April.

The move has plunged Nepal into fresh political uncertainty after years of short-lived governments.