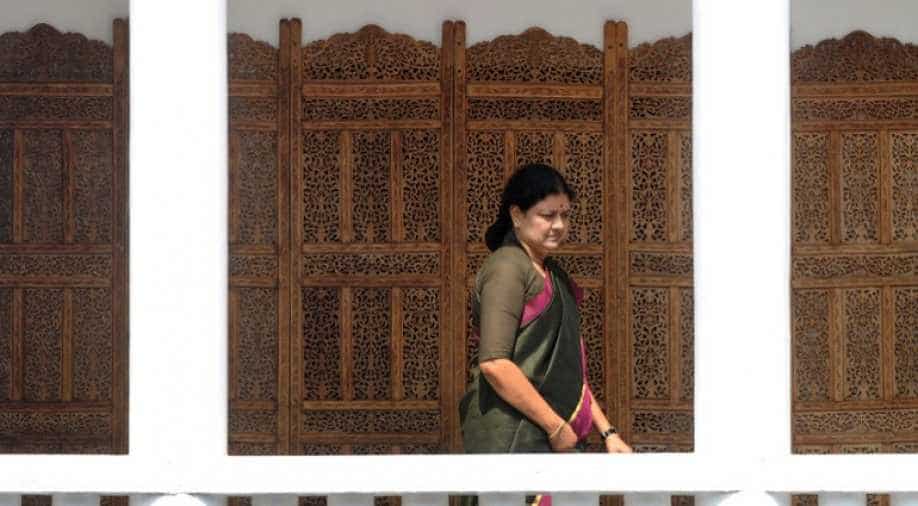 Sasikala, also known as Chinnamma, was elected the legislative party head by the AIADMK after a meeting with cabinet ministers and senior party leaders on Sunday. Photograph:( AFP )

The AIADMK announced on Sunday that VK Sasikala would take over as the chief minister of Tamil Nadu on February 9. Sasikala, also known as Chinnamma, was elected the legislative party head by the AIADMK after a meeting with cabinet ministers and senior party leaders on Sunday.

Sasikala's name for the post of leader of AIADMK legislature party leader was also proposed by O Panneerselvam, the party said.

Many took to social media to express their dissent and anger upon her appointment.

Rapper-activist Sofia Ashraf and her crew went to Poes Garden, home to late chief minister Jayalalithaa, late on Sunday night and sang angrily, expressing their displeasure on the latest appointment to the Tamil Nadu chief minister's office. The video was live streamed on Facebook.

"The main lyrics in the song is 'those who were not elected need not become ministers'. And that's the sentiment most Tamilians have now. Democracy, as we know is dead. How can someone not elected by people become chief minister? It may be all legal, but it isn't right. People can't suddenly pop up and say we will be the CM," Sofia told The News Minute.

"It seemed like nothing was in our control. Felt angry and upset," Ashraf added.

Congress leader and former finance minister P Chidambaram has also questioned AIADMK's latest move. In a series of tweets, he raised doubts about Sasikala's ability to take over as chief minister of Tamil Nadu.

Looking back with pride, TN CM chair was occupied by Kamaraj and Anna. AIADMK and PEOPLE OF TAMILNADU are now moving in opposite directions.

Sasikala is expected to be sworn in as chief minister of the state on Tuesday. Meanwhile, a PIL was filed in the Supreme Court seeking to restrain the swearing-in of Sasikala on Tuesday.

Tamil Nadu has on three occasions in the past witnessed persons not elected to the assembly being sworn in as chief minister -- CN Annadurai in 1967, VN Janaki (MGR's widow) in 1987 and Jayalalithaa in 2001. Of them, Janaki had to quit office within 24 days having lost the confidence of the House. Sasikala's proposed swearing-in will be the third such event since May 2016 when Jayalalithaa retained power.