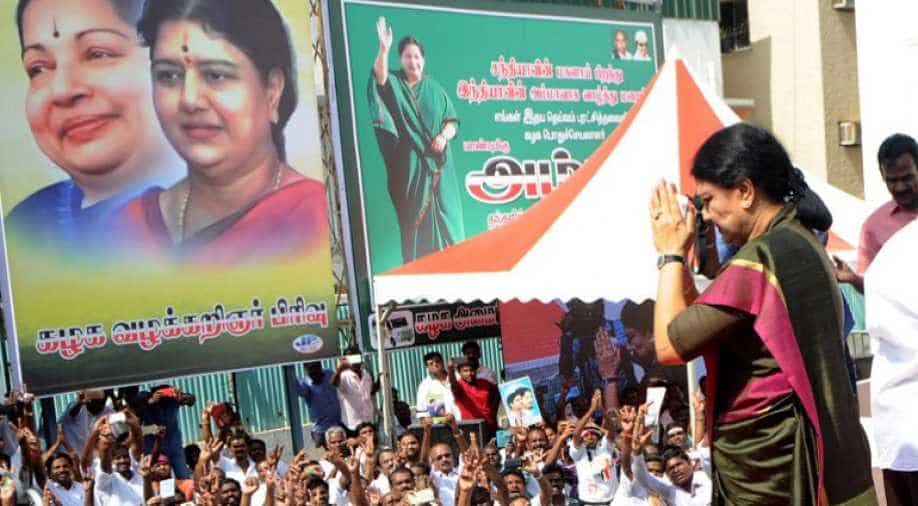 DMK spokesperson further asserted that there is nothing new or shocking about the quick development as the AIADMK has always worked in mysterious ways. Photograph:( AFP )

The DMK also expressed its confidence in its party leader MK Stalin for facing the AIADMK in the elections and yielding great results. "We have always pointed out there is no transparency in how the affairs of the AIADMK are functioning. Right from the hospital association of the chief minister or yesterday's incident on how the resignation letters were sought from top advisors of the government. Everything is shrouded in mystery," DMK spokesperson A Saravanan told ANI.

He further asserted that there is nothing new or shocking about the quick development as the AIADMK has always worked in mysterious ways.

Beaming with confidence in his leader MK Stalin and the DMK's history of defeating the AIADMK on many accounts he said, "Ever since our leader MK Stalin took charge as our working president and especially as the opposition leader, he has been commended a lot for his dignified politics, courteous manner and how he brought back lot of bonhomie into politics. He is gaining appreciation. That will definitely guide us to victory in whatever we face," Sarvanan said.

He added that the DMK has seen a lot of famous political leaders in the opposition and has fought and won fair and square. "Be it the case of great leader Ram Raj, Raja ji or MGR all of them we have fought them and we have won them, so there is nothing for us to fear, we have the faith in people, we have the faith in our ideologies and policies, and the way we have implemented our policies for the development of Tamil Nadu," Sarvanan said.

AIADMK general secretary Sasikala Natarajan on Sunday was elected as the legislative party leader of the party and with this, she is all set to take over as the chief minister of Tamil Nadu. Incumbent chief minister of Tamil Nadu O Panneerselvam proposed the name of Chinnamma (Sasikala Natarajan) as the AIADMK legislative party leader.

Speculations were rife that party general secretary Sasikala would be chosen as the new legislative party leader -- paving the way for her to assume the chief minister's mantle. Though many party leaders favour such a move, a few believe Panneerselvam should be retained because he is doing a good job at the helm of affairs.

Earlier, Rajya Sabha MP Sasikala Pushpa and AIADMK leader KC Palaniswamy complained to the Election Commission (EC) that Sasikala's appointment as the party's interim general secretary was carried out in an undemocratic manner. The Election Commission then issued a notice to the AIADMK, seeking clarifications in this regard.

Sasikala will be the third woman chief minister of Tamil Nadu after Janaki Ramachandran and Jayalalithaa.