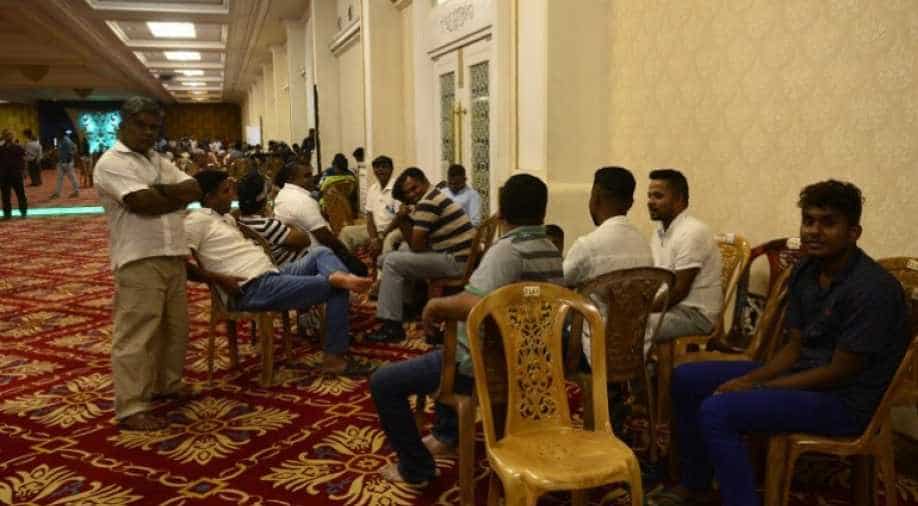 Thousands of loyalists from across the country are camped out at the Temple Trees residence in Colombo, a colonial-era bungalow where Ranil Wickremesinghe has been holed up since his shock dismissal more than a week ago.

The banquet hall at Sri Lanka's ousted prime minister's official residence is packed with supporters -- many sleeping on chairs and the floor -- who have come to stand guard as he tussles for power with an old rival.

Thousands of loyalists from across the country are camped out at the Temple Trees residence in Colombo, a colonial-era bungalow where Ranil Wickremesinghe has been holed up since his shock dismissal more than a week ago.

Day and night they top up coconut oil lamps and keep jasmine-perfumed incense sticks burning in the 5,000-capacity banquet hall -- usually reserved for state dinners and VIP weddings -- while the 69-year-old plots his next move.

President Maithripala Sirisena sacked Wickremesinghe on October 26 but he has refused to accept the decision or to leave the residence so former strongman leader Mahinda Rajapakse -- who was named in his place -- can move in.

SM Faheed, a 73-year-old diehard supporter of Wickremesinghe's United National Party (UNP), vowed to stay there until the constitutional crisis is resolved.

"I will not leave until Ranil is given the PM's chair," Faheed said. "We are here to support him and make sure no one tries to throw him out of Temple Trees."

Wickremesinghe has asked lawmakers to vote to decide between him and Rajapakse and end the crisis, but parliament has been suspended since his sacking.

"If I win... (Rajapakse) must stand down. If he wins, I will leave Temple Trees and move away," Wickremesinghe told AFP on Friday.

But he will have trouble convincing his followers to give way.

Shakuntala Devi travelled 400 kilometres (250 miles) from the Tamil city of Jaffna in the north of the country to join the crowd that grows each day.

Volunteers bring meals to Devi and others while Buddhist monks chant prayers that are broadcast on a public address system within the premises.

Devi said she wanted to show solidarity after Wickremesinghe's government built 5,000 homes for people like her who were displaced by the civil war that ended in 2009.

"I came to show my gratitude to the prime minister," she said.

Another protester who gave her name as Sandya said: "We want to tell Sirisena: If you have any shame, call parliament and let our leader take back his seat."

Others in the huge crowd echoed her views, with one person saying Sri Lanka had "become the laughing stock of the world".

"Sirisena is the most ungrateful man. May he be cursed and be struck by lightning," said Jayanthi Jayewardena, an elderly supporter.

Sirisena won the presidency from Rajapakse in 2015 with the help of Wickremesinghe and his UNP. The two formed a coalition, but have since fallen out badly.

Matters came to a head with the sacking, which Wickremesinghe acknowledged had surprised him.

Sirisena has cut Wickremesinghe's official bodyguard retinue and pool of limousines. A depleted plain clothes contingent now keeps watch over the residence while a private cleaning company has also been hired.

A few police commandos in camouflage uniform can also be seen.

Legislators loyal to Wickremesinghe keep up back-to-back press conferences at the residence which has become the centre of media attention, with crowds mobbing visiting politicians and asking for selfies.

In comparison Rajapakse has remained low-key, quietly organising a campaign to win over MPs to support him when parliament eventually meets.

Huge sums have allegedly been offered to potential defectors and some lawmakers have already left the UNP.

Wickremesinghe, who has been speaking to local and foreign journalists while conducting talks with allies, said he was concerned that the power struggle could degenerate into street violence.

"There can be trouble in the country if this goes on," he said.

"We will be calling on our people not to resort to violence... but you don't know what arises in a situation like this. A few desperate people can start off a bloodbath."