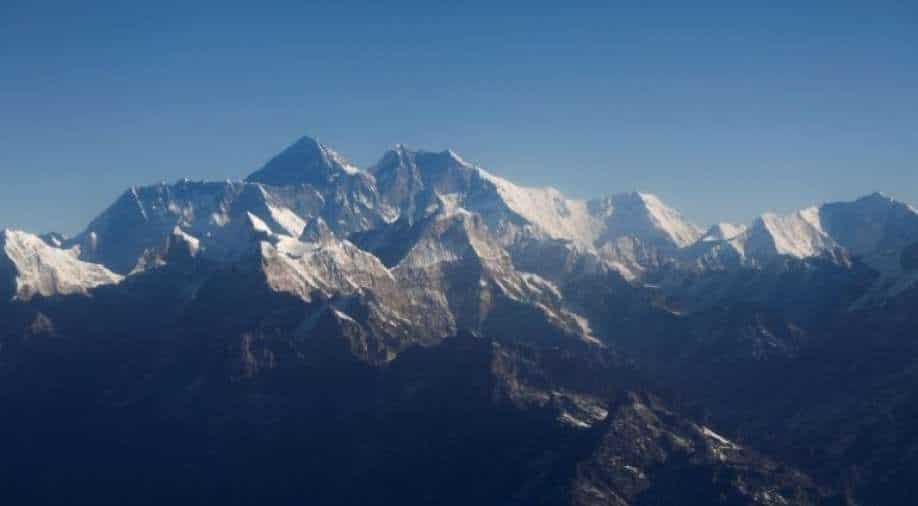 FILE PHOTO: Mount Everest, the world highest peak, and other peaks of the Himalayan range are seen through an aircraft window during a mountain flight from Kathmandu, Nepal January 15, 2020. Photograph:( Reuters )

Death of Russian climber Pavel Kostrikin at Camp I of Mount Everest marked the first reported death of a foreigner in current climbing season on the world highest peak. The camp is located at an altitude of 5360 metres  (17,585 feet).

Kostrikin (55) died on Saturday, as per Bhishma Kumar Bhattarai, an official of Nepal's Department of Tourism who was quoted by Reuters.

"The Russian climber fell sick at Camp II and died after being brought to the Camp I," Bhattarai told Reuters without giving further details.

Camp II on the normal southeast ridge route on Everest is located at a height of around 6,400 metres (20,997 feet).

The body of the climber would be brought to Kathmandu when the weather improves.

As per the database of The HImalayan, 311 people have lost lives so far while trying to climb Mount Everest. The peak has been climbed 10,657 times.

An Indian climber died during a summit push at Nepal's Mount Kanchenjunga, the world's third-highest mountain, a hiking official said on Saturday.

Last month, a Greek climber and a Nepali Sherpa guide died on other peaks.

Mountain climbing is the main tourism activity in Nepal and a key source of income as well as employment. The country has eight of the world's 14 highest mountains.

More than 900 foreign mountaineers have received permits to climb 26 Himalayan peaks in Nepal, including 316 permits for Mount Everest, during the current season ending in May.