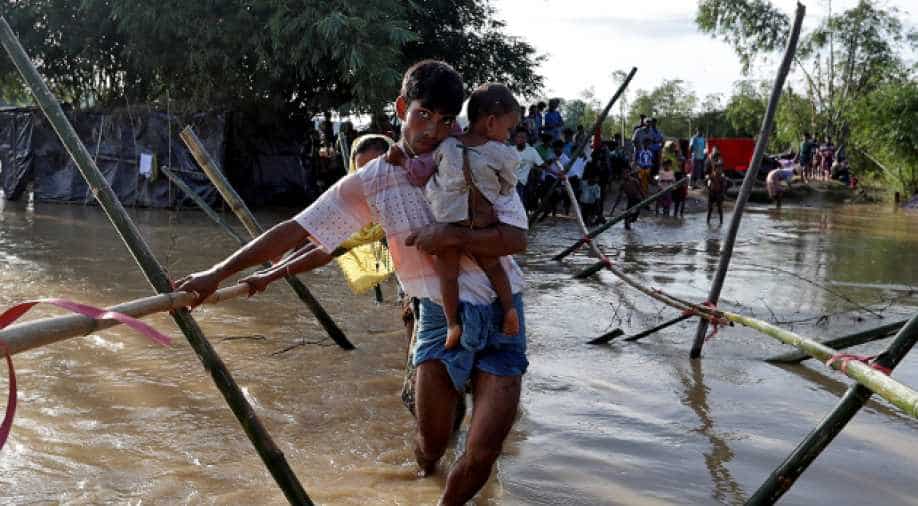 A Rohingya refugee crosses a swollen river at a camp in Bangladesh. Photograph:( Reuters )

Myanmar's UN ambassador made his governments position clear asserting that the "instituting such a mission is not a helpful course of action in solving the Rakhine issue". ||Almost 400,000 Rohingyas have fled to Bangladesh from Myanmar since August 25.

The Myanmar government today rejected UN human rights investigators demand for access to Rakhine state even as Aung San Suu Kyi appealed to outside observers "to visit Myanmar and see the situation for themselves".

Suu Kyi in a televised address to the nation said, "Myanmar invites members of the international community to visit. There have been allegations and counter-allegations, will listen to all, culprits will be punished irrespective of race or religion."

However, Myanmar's UN ambassador Htin Lynn made his governments position clear asserting that "instituting such a mission is not a helpful course of action in solving the already-intricated Rakhine issue".

The UN had set up a council in March to investigate allegations of violence against Rohingyas in Rakhine state.

The head of the UN mission Marzuki Darusman said: "In the government’s interest and in the interests of the people of Myanmar to communicate their views and evidence directly to the UN mission."

The UN mission has already dispatched a team to Bangladesh to probe the state of Rohingyas who have fled to the country.

Almost 400,000 Rohingyas have fled to Bangladesh from Myanmar since August 25.

Rohingya refugee woman waits for aid with her daughter along a road in Cox's Bazar, Bangladesh (Reuters)