WATCH: Want to find out why Rohingya have fled Myanmar, Suu Kyi says in state of union address 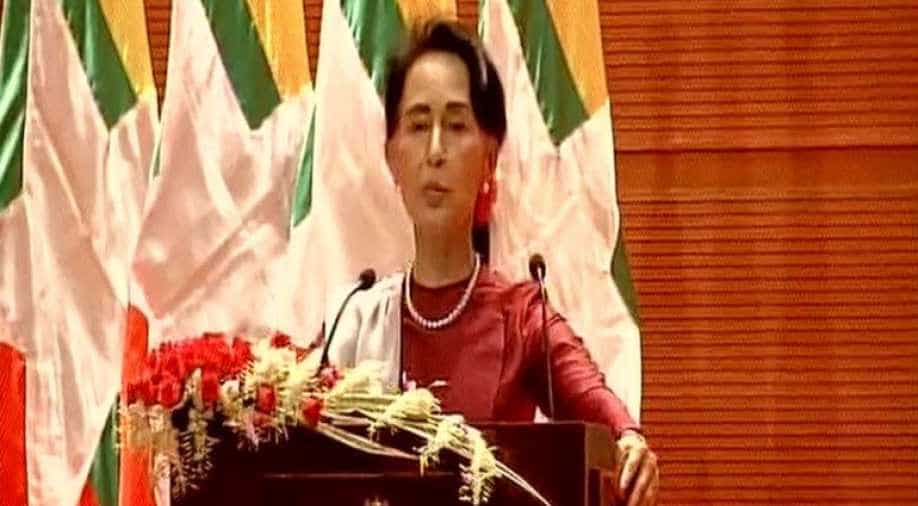 The international community has accused Myanmarese security forces of conducting a 'genocide' or 'progrom' against the ethnic Rohingya minority in recent weeks. Photograph:( ANI )

"Myanmar is a complex nation. People expect us to overcome all the challenges in shortest time possible," Myanmar state counsellor and de-facto leader of the country Aung San Suu Kyi said Tuesday in her state of the union address.

Suu Kyi has been under intense global scrutiny because of the Rohingya refugee crisis.

Close to 400,000 Rohingya have fled Myanmar since August 25 when violence broke out in Myanmar's western Rahkhine state after a Rohingya militant group allegedly attacked police outposts there.

Since then, Myanmarese security forces have been accused of conducting a "genocide" or "progrom" against the Rohingya minority.

The United Nations has said that what is happening in Rakhine looks like a "textbook case of ethnic cleansing".

Suu Kyi was speaking in the Myanmar capital Nyapyidaw.

She had recently cancelled her trip to the United Nations General Assembly, presumably because of the scrutiny of the Rohingya crisis.

World leaders have been calling for Suu Kyi to speak out against what is allegedly being done to the Rohingya, and to put a stop to the violence and the crisis.

"Peace and stability was something we had to achieve after nearly 70 yrs of internal conflict," Suu Kyi said on Tuesday.

"We condemn all human rights violations, we are committed to peace and rule of law," she added.

"Myanmar does not fear international scrutiny, (we are) committed to (a) sustainable solution in Rakhine state," she said.

We would like to find out why this exodus is happening, would like to talk to the people who have fled: Aung San Suu Kyi pic.twitter.com/ZSVSR4CTPX

We condemn all human rights violations, we are committed to peace and rule of law: Aung San Suu Kyi

We would like you(world) to think of our country as a whole, not just as little afflicted areas: Aung San Suu Kyi

"(The) government has been making every effort to restore peace and stability and to bring harmony in Rakhine communities," she added.

She added that: "Myanmar feels deeply for (the) suffering of all groups in Rakhine."

Suu Kyi has so far maintained a studied silence on the Rohingya crisis, even as world leaders have poured opprobrium on her.

She added that she is "concerned to hear about Muslims fleeing to Bangladesh."

Suu Kyi said that "many Muslim villagers have remained", that "not all have fled".

She added that Myanmar "invite(s) members of the international community to visit."

"There have been allegations and counter-allegations, will listen to all, culprits will be punished irrespective of race or religion."

"We had made a central committee for implementing rule of law and development in Rakhine," Suu Kyi said.

"Throughout the last year, we continued with our program of development and establishment of peace," she added.

And that "Myanmar (was) prepared to start a refugee verification process for those who wish to return."

"We don't want Myanmar to be a nation divided by religious beliefs or ethnicities. Hate and fear are (the) main scourges," Suu Kyi said on Tuesday.

"We would like you (the world) to think of our country as a whole, not just as little afflicted areas," she added.

And she said that since August 25, Myanmar has declared the Arakan Rohingya Salvation Army - the organisation Myanmar says carried out the attacks on the police posts in Rakhine -- a terrorist group.

India's high commissioner to Myanmar Vikram Misri, reacting to Suu Kyi's address, said "it was an encouraging address and had many positives".

"Aid, assistance, and development must reach all those who are affected," he added.

It was an encouraging address and had many positives: Vikram Misri,Indian Envoy to #Myanmar on #AungSanSuuKyi pic.twitter.com/fQ3rwp7DcJ