Rewind 2021: When Taliban in Afghanistan became the 'new normal' 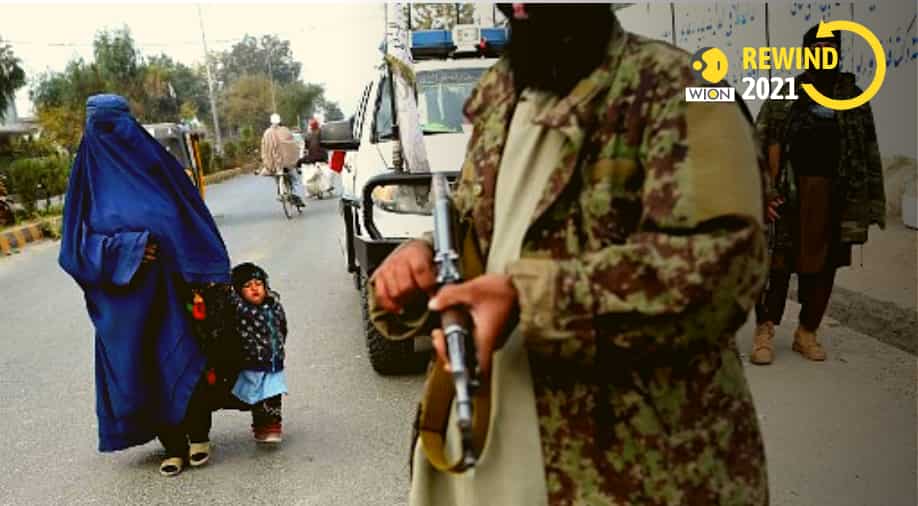 Images and videos from the initial days after the Taliban's control portrayed a picture of chaos and lawlessness. Photograph:( AFP )

The second half of 2021 belonged to the Taliban and its changed narratives with the world, but it remains to be seen what the next year will bring to Afghanistan and its people

In 2021, the Taliban in Afghanistan became the "new normal" for the world that watched the insurgent group's shocking takeover of Kabul on their television screens. The situation, however, was extremely difficult for those who experienced the change first hand.

Wielding machine guns, the Taliban soldiers roamed the streets and swept across Afghanistan, taking control of towns and cities. They managed to change the political map of the country in over ten days as the deadline neared for the NATO allies to withdraw their troops. Taliban soldiers captured the first provincial capital on August 6 and they completed the takeover on August 15 after entering the gates of Kabul.

The Taliban take over led to a mass evacuation of people, who were willing to flee the country and migrate to other nations after former President Ashraf Ghani fled the country, leaving thousands of countrymen's fate uncertain.

Images and videos from the initial days after the Taliban's control portrayed a picture of chaos and lawlessness, which became every day's tale with news about blasts and stories about injustice coming in from different parts of the country.

Afghanistan has been tremendously dependent on foreign aid and faced financial challenges after the Taliban's control as some of the major donors halted their support for the country.

The economic crisis is not only because of the freezing of funds, but the country faced challenges of drought caused by global warming.

People in the country faced severe financial struggles as a recent report by AFP mentioned that many people in the capital Kabul resorted to selling household goods to buy food to eat, buy coal to heat their homes in the winter and fulfil other basic amenities.

ALSO READ | US sets up commission to assess Afghanistan failures

However, a sigh of relief came when international donors recently agreed to release $280 million in aid to Afghanistan.

The Afghanistan Reconstruction Trust Fund (ARTF) will go "to provide humanitarian assistance to the people of Afghanistan at this critical time," the World Bank said in a statement, which was released on Friday (December 10).

As per repeated warnings by the United Nations, Afghanistan is on the brink of the world's worst humanitarian crisis.

The United Nations Assistance Mission in Afghanistan (UNAMA) called for concrete actions to end violence against women. A release by UNAMA read, "The global community needs to listen to the voices and experiences of Afghan women and girls and urgently respond to their needs, especially survivors of violence and those who face multiple and intersecting forms of discrimination."

The Taliban administration released a set of restrictions on Afghan media, including banning television dramas that included female actors and ordering women news presenters to wear "Islamic hijab". During the Taliban's previous rule, strict curbs were placed on women.

The Taliban have pledged a softer rule as compared to their first stint in power in the 1990s, however, the future of the country is filled with uncertainties.

Ever since the takeover, the Taliban want to be recognised by the international community and they showcase the Taliban 2.0 regime as a legitimate government with a proper set-up, comprising of different ministries, even justice ministry.

The second half of 2021 belonged to the Taliban and its changed narratives with the world, but what's in store for Taliban in 2022 - the future will tell.