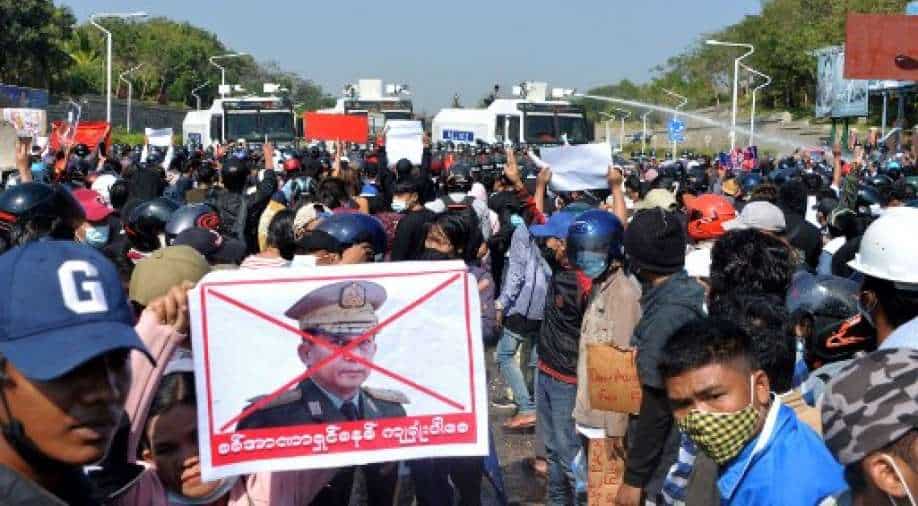 Over a hundred people have been arrested as Myanmar police began a crackdown on the anti-military protests. Police also started using live bullets and there has been at least one incident where a protester was fatally injured.

In other parts of Myanmar, police cracked down on demonstrators, firing warning shots and shooting water cannons to disperse crowds. According to party officials, the Myanmar military ransacked Suu Kyi's party headquarters.

Myanmar's state television meanwhile, reported injuries to police during attempts to disperse protesters it said were acting aggressively. The state television reported that a police truck had been destroyed at a demonstration in Mandalay.

Footage showed the aftermath, including injured police who it said had acted within the law.  It described the protests as being orchestrated by people who wanted to harm the nation's stability, but made no mention of last week's coup.

The US has condemned the use of force against demonstrators.

"We strongly condemn violence against demonstrators, all individuals in Burma have rights to freedom of expression, association, peaceful assembly, including for the purpose of peaceful protest. We repeat our calls for the military to relinquish power, restore a democratically elected government, release those detained and lift all telecommunication restrictions and to refrain from violence," US State Department spokesman Ned Price said.

The protesters have been demanding that power be restored to the deposed government, and are seeking freedom for the nation's elected leader Aung San Suu Kyi and other ruling party members who have been detained since the military took over last week.