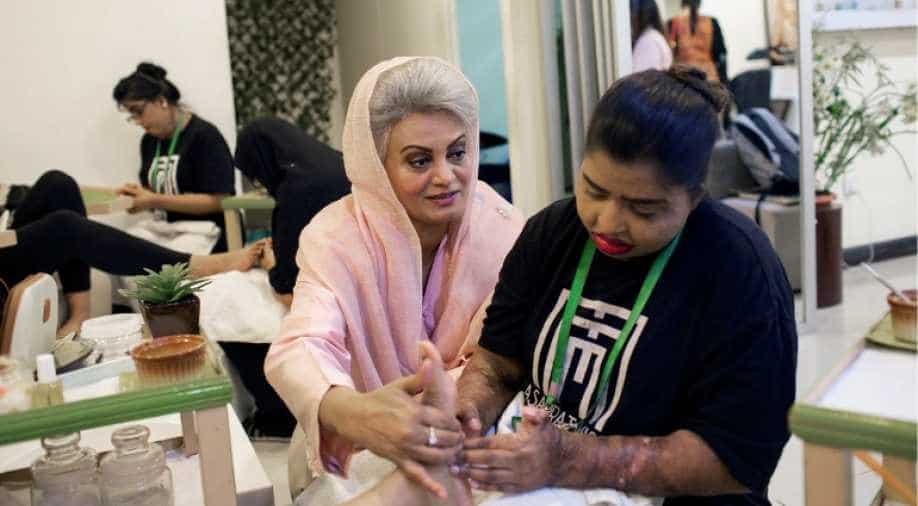 Pakistan beautician, entrepreneur and activist Masarrat Misbah teaches one of her students at her beauty center in Lahore, Pakistan. Photograph:( Agencia EFE )

Masarrat Misbah a Pakistani entrepreneur has rehabilitated the lives of hundreds of female survivors of disfiguring acid attacks in the country, with her nonprofit organisation 'Smile Again'.

The life of a Pakistani beautician, Masarrat Misbah, changed forever 16 years ago when a girl “without a face” sought her help. Since then, the woman entrepreneur has rehabilitated the lives of hundreds of female survivors of disfiguring acid attacks in the country.

"In 2003, a young girl walked into my office with her face covered and asked me to do her makeup. When she drew her scarf I was horrified," Misbah told EFE in an interview.

"She was a girl without a face. One eye was missing, her nose was a hole, her neck and chin were contracted," said Misbah, the founder of a chain of 74 beauty salons.

After helping the first woman, Misbah issued an announcement in various newspapers offering help to acid attack victims in Pakistan.

"I expected three or four women, but 42 turned up on the first day," Misbah recalled, and thus began Smile Again, a nonprofit which has helped 700 women who have suffered acid attacks or been burned in accidents.

Misbah's organization offers them medical services, as an acid attack victim needs to go through around 20-25 surgeries over many years to recover a part of their face, although even that is not always possible.

"I have never seen a girl look like how she was before," the 59-year-old philanthropist acknowledged.

The nonprofit also offers them training and education, including help in completing college degrees or doing nursing courses.

But Smile Again's speciality lies in training the women as beauticians and giving them the opportunity to work in outlets of the chain as well as helping them open their own salons in their city.

"When a woman starts earning, automatically her family members and the society accepts her. And it gives them more confidence. They are no longer a burden on the family," said the entrepreneur, a feminist in a traditionally patriarchal society.

Saba Shaheen, 19, has been a victim of a brutal acid attack, carried out by a suitor who refused to accept rejection and threw acid on her when she was just 15.

“When I came to Masarrat Misbah she hugged me and said don't worry, we will help you," Shaheen told EFE.

Two years and 21 surgeries later, Shaheen is training to become a beautician and plans to open her own salon in the city of Pakpattan with the help of Smile Again.

She doesn't think she would be able to marry and raise a family.

"After what happened, I don't like men," she said.

Most of the acid attacks in Pakistan and the rest of South Asia are committed by rejected suitors or by husbands or the in-laws for the woman's family not paying enough dowry and by parents who resent not having a male child while sometimes they are the result of a dispute between two families.

Around 90 per cent of the attacks are carried out by men and the majority of the victims are women, according to nonprofit Acid Survivors' Foundation Pakistan.

The latest ASF Pakistan report, released in 2017, said the number of such attacks had gone down by 50 per cent in recent years, peaking at 204 in 2014 and dropping to 103 in 2016, a phenomenon attributed to the implementation of stricter laws and better awareness in the society.

In 2011, the Pakistan parliament approved a law which increased the sentence for this offence to 14 years of prison, and although only 10 per cent of the cases result in punishments, the activists still see the law as a step forward.

"There are laws in the country for everything. The laws are there but implementation is slow. At least something has moved," Misbah said.

The activist now wants lawmakers to pass a law regulating the sale of acid, a measure which has been successful in neighbouring India and Bangladesh.

However, she added that it was above all a problem related to a peculiar mindset of male entitlement.

"Men want to have power over woman. Women are taught to think they are slaves for men. The women who ask for their rights, they are 'bad' women," the entrepreneur said.

"Men don’t like me. They talk all kind of nonsense about me," said Misbah, breaking into laughter.