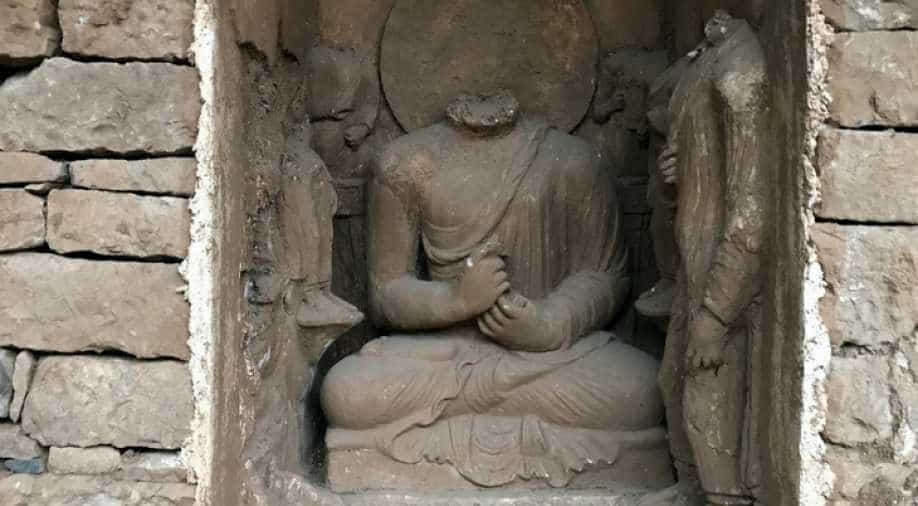 Statues are seen after being discovered and unveiled to the public, during a ceremony at the Buddhist-period archeological site near Haripur. Photograph:( Reuters )

A 1700-year-old Buddha has been discovered by archaeologists near Bhamala Stupa in Haripur district in Pakistan on Wednesday, as an initiative to uplift tourism and project religious harmony in the region.

The 48-foot high Kanjur stone Budhha was first found in Bhamala province in 1929. Eighty-eight years later, the statue was unearthed and unveiled in presence of the chairman of the Pakistan Tehreek-e-Insaf Imran Khan, reports said.

Imran Khan, chairman of the Pakistan Tehreek-e-Insaf (PTI) political party, along with the members of the media, looks on during the unveiling ceremony of the Buddhist-period archeological site. (Reuters)

“This is from the 3rd century AD, making it the world’s oldest sleeping Buddha remains,” Abdul Samad, director of Bhamla’s archaeology and museums department, told Reuters.

“We have discovered over 500 Buddha objects and this 48-foot-long sleeping Buddha remains,” he added.

Opposition leader Imran Khan also said: “It’s a question of preserving these heritage sites which are an asset for our country.”

These discoveries by archaeologists have given more insight into the history of the ancient Taxila Valley civilisation, reports stated.

A general view of the main stupa is seen after it was discovered and unveiled to the public, during a ceremony at the Buddhist-period archeological site. (Reuters)

The region was once the center of Buddhist civilization that took root under the Mauryan king Ashoka 2,300 years ago.