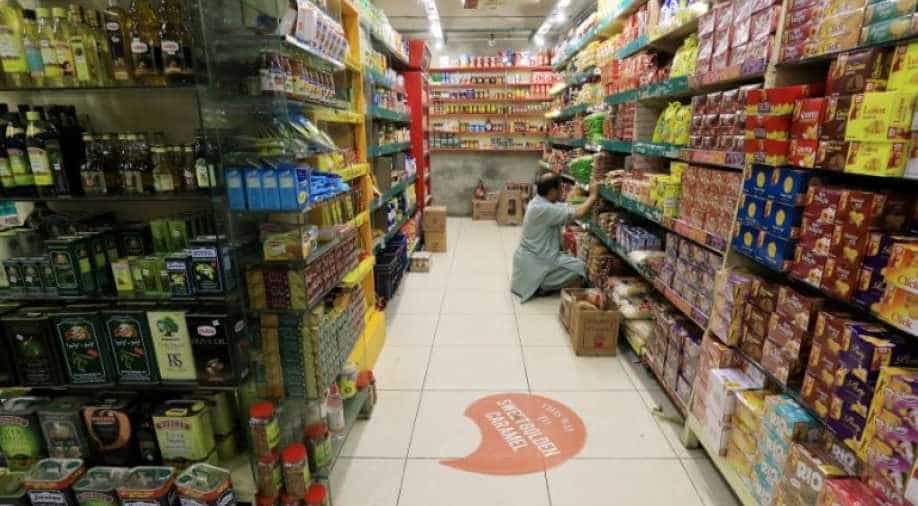 A shopkeeper arranges grocery items at a store in Peshawar, Pakistan. Photograph:( Reuters )

Rashid Mehmood owns a small shop selling children's clothing in Aabpara, the oldest market in the capital, Islamabad. He says he has faced a critical decline in sales over the past year, pointing to Khan's election last August.

Rashid Mehmood owns a small shop selling children's clothing in Aabpara, the oldest market in the capital, Islamabad. He says he has faced a critical decline in sales over the past year, pointing to Khan's election last August.

The last six months had been "particularly harsh", he said.

"Do you see any customers coming into my store?" he asked as he stood in his empty shop, decorated with brightly coloured leggings and dresses.

He said had not made a sale in a week.

In normal times, Mehmood's store serves the kind of middle-class shoppers who in recent years have been behind an import-led consumption splurge that propped up growth and helped hide the problems of an economy riddled with inefficiency and without a strong export base.

Fed by low-interest rates, heavy borrowing and an over-valued rupee currency that, for a time at least, allowed imports to pour in, consumption gave an illusion of growth that has now been replaced by a severe economic hangover.

Like so many of its predecessors, Khan's government, which came to power vowing to root out corruption and create millions of jobs, has been forced to turn to the IMF to prevent a balance-of-payments crisis as the money runs out.

Economic growth, which reached 5.5 per cent in the fiscal year to June 2018, is expected to slow to 2.4 per cent this financial year, according to IMF estimates, barely enough to keep pace with the growth in a population that now numbers 208 million.

The rupee has lost about a quarter of its value in a slide that has driven up fuel costs and helped push a relentless increase in prices for food and other necessities.

The central bank, which this week raised interest rates to 13.25 per cent, expects inflation to average as much as 12 per cent this year.

As ever, the poorest have been hit hardest. But the squeeze on middle-income households poses a special challenge for Khan, who has enjoyed wide support among an urban middle class that has grown over the past two decades as poverty levels have come down from two-thirds of the population to about a quarter.

Further along in Aabpara market, Abida Jahan has come with her family from Haripur town, a couple of hours drive away, after the food-processing factory her husband worked in was shut down. They are looking for a gift to celebrate their daughter's 13th birthday.

However, the surge in prices has meant that they will likely go home empty handed.

"This is the same government that promised to decrease oil prices to 45 rupees," says Abida's husband, recalling that Khan's PTI party had promised to halve the price of fuel and build a new welfare state.

Shopping malls with foreign retail brands and fast-food franchises have proliferated in recent years, serving a middle class who "define themselves by what they can buy and where they can eat", says Ammara Maqsood, author of The New Pakistani Middle Class.

In the first decade of the century, economic growth fuelled by privatisation led families to new prosperity marked by their ability to buy a motorbike, rent a home or send their children to private school.

Now businesses supplying consumers with everything from mobile phones to clothing, motorbikes, and cars bought on hire purchase are feeling the squeeze.

"Income has not increased at all so no matter what, if they are going to a shopping mall or wherever, they are being affected," she said.

The government has placed the blame squarely on the corruption of past governments, notably that of former Prime Minister Nawaz Sharif, who championed big infrastructure projects that spurred growth but drained currency reserves.

Sharif is now serving a seven-year sentence for a corruption conviction he said was politically motivated.

How convincing the government's argument will be as the crisis bites remains to be seen and a nationwide strike by wholesalers and traders last weekend gave some taste of the growing unhappiness.

"Let's be honest, it feels like we are the ones who are being punished for forcing out the crooks," says Fawad Subhani, who owns a domestic appliance store in Islamabad.