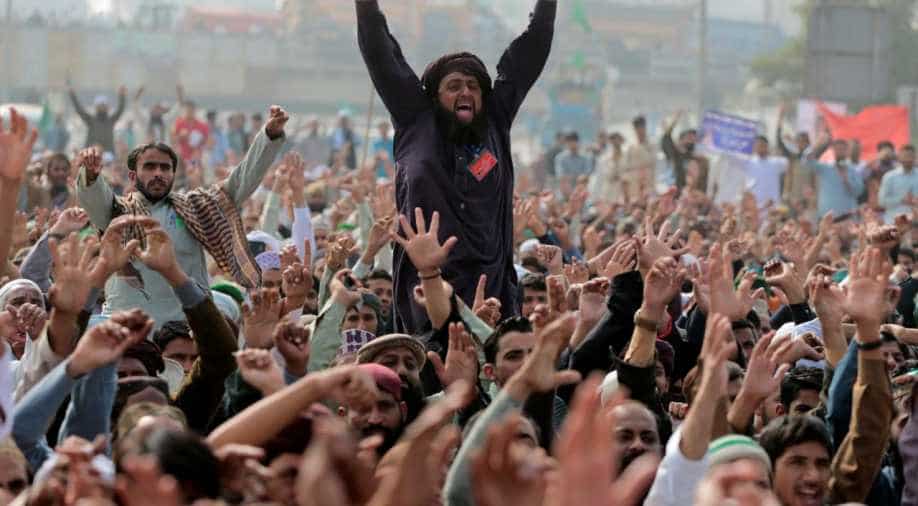 Among the 1,135 people arrested is TLP chief Khadim Hussain Rizvi, who has been detained under three sections of the MPO ordinance, said a notification issued here earlier today.

Pakistani police have arrested over 1,100 members of the Tehreek-i-Labbaik Pakistan, including the radical Islamist party's chief who had given a protest call for Sunday against the acquittal of Christian woman Asia Bibi on blasphemy charges.

Among the 1,135 people arrested is TLP chief Khadim Hussain Rizvi, who has been detained under three sections of the MPO ordinance, said a notification issued here earlier today.

The Punjab government has imposed Section 144 province-wide which will be in effect till December 1. Rallies, demonstrations as well as any congregations of five or more people are banned under the section.

The use or display of any kind of weapons is also prohibited.

A senior police officer told PTI that a team comprising government officials and clerics tried to persuade Rizvi in Lahore late on Friday night to defer its November 25 protest, but he refused to budge.

"On this police arrested him and other leaders," the officer said.

"Khadim Hussain Rizvi has been taken into protective custody by police from Lahore. The action was prompted by TLP's refusal to withdraw its call for protest on

The minister, however, clarified that the "arrest has nothing to do with Asia Bibi case".

"The TLP has become a continuous threat to the life and properties of the citizens and is doing politics under the guise of religion... The situation is fully under control, people should remain peaceful and fully cooperate with authorities," Chaudhry said.

He said the government did its best to convince the party against staging the protest, but they refused every offer and started to incite violence.

There were reports of TLP workers clashing with police in Lahore following Rizvi's arrest. Three policemen and seven workers are reported to have been injured.

Following the verdict, the TLP had termed the chief justice and other judges in the bench "liable to be killed" and had called Army chief General Qmar Javed Bajwa a non-Muslim and urged Muslim generals to revolt against him.

Bibi was convicted in 2010 after being accused of insulting Islam in a row with her neighbours. She always maintained her innocence, but spent most of the past eight years in solitary confinement.

She has been released from the jail and the government says is in a 'safe' house. The government says she cannot leave the country till decision on the review petition against her acquittal. Chief Justice Nisar has ordered full protection to Bibi.

TLP is an Islamist political party with Islamic ideology. It is known for widespread street power and massive protests in opposition to any change to Pakistan's blasphemy law.