Pakistan a 'well of death', says India's Uzma who was forced to marry Pakistani at gunpoint 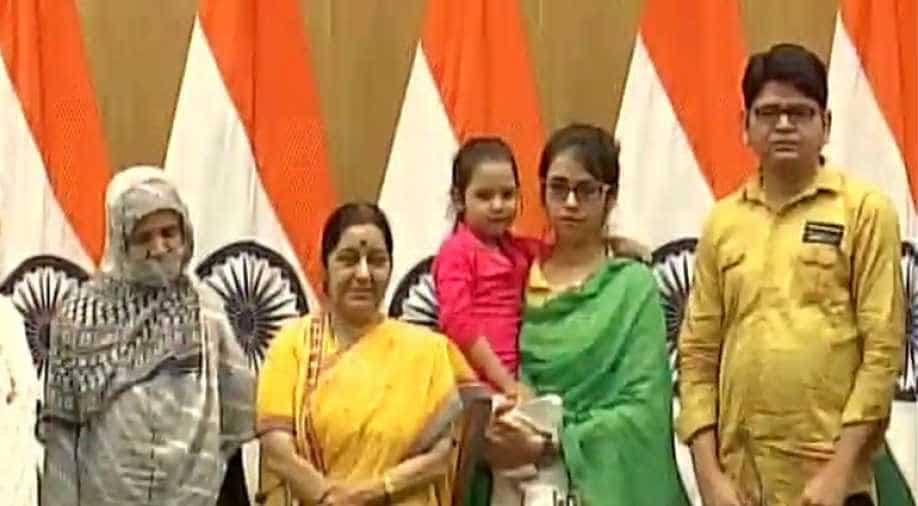 Uzma broke down in the middle of the joint conference. In pic, Uzma with her daughter, mother and brother. Photograph:( ANI )

Uzma said women who went to Pakistan after an arranged marriage were miserable and living in terrible circumstances ||Uzma said she was very grateful to external affairs minister Sushma Swaraj and India's deputy high commissioner in Pakistan, JP Singh, for supporting her through her entire ordeal ||

At a joint press conference with the external affairs ministry in New Delhi, Uzma broke down as she described her ordeal after she was forced to marry a Pakistani at gunpoint in the Taliban-infested Buner.

She has blamed Tahir Ali, whom she reportedly met in Malaysia and fell in love with, of forcing her into marrying him in Pakistan.

She said she was drugged by her husband and allegedly kidnapped.

"Tahir tortured me in all ways including emotionally. He threatened to kill my daughter if I didn't go according to them (family). They kept pistols with them.

The situation developed so fast. Tahir gave me a sleeping pill and from my point of view, this can be called a kidnapping. I did not know that the situation would deteriorate so much after crossing the Wagah Border. The place and the people were so strange. The people were not good. I do not know how to describe everyting, a visibly distraught Uzma said.

She also alleged that the women who went to Pakistan after an arranged marriage were living in very trying circumstances.

"It's easy to enter Pakistan, but it's impossible to leave from there. I have seen women who go there after arranged marriages.

They're miserable and living in terrible circumstances. There're two, three, even four wives in every house," she said.

"If I had stayed there for few more days, I would have died. They lure women from east Asian countries like Phillipines, Malaysia... there're many women like me still trapped there," she added.

"I want to express my gratitude to Sushma Swaraj and the high commission officials for helping me. They made me realise that my life is valuable," she said.

Sushma ma'am used to call me everyday that don't worry, we will not let anything happen to you. I was happy that the government was doing something for me, it was enough for me," she said.

"The moment she crossed the (Wagah) border, I was relieved. I also want to thank Uzma for placing her trust on the high commission," she said.

The Islamabad High Court allowed Uzma's plea earlier in the day and ordered the police to escort her to the Wagah Border.

Uzma hails from New Delhi. She had travelled to Pakistan earlier this month.