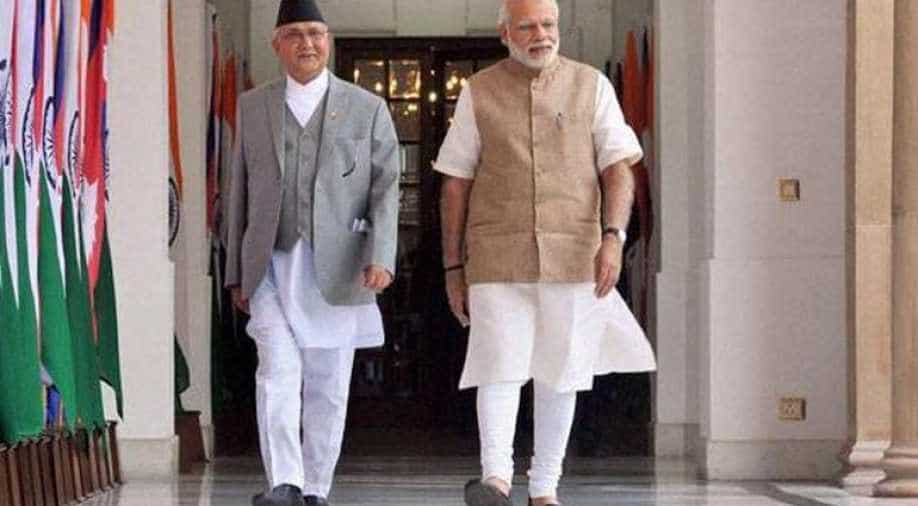 Till as recently as last April – before Oli’s election victory and visit to India – there was a marked hostility in India-Nepal relations.

Prime Minister Narendra Modi’s third meeting this year with his Nepalese counterpart KP Sharma Oli, more than anything else, underscored that a measure of equanimity has been restored to the bilateral relationship, which had hit its lowest point less than three years ago.

The bitterness caused by the economic blockade of 2015 – following New Delhi’s aborted attempt to scuttle Kathmandu’s promulgation of the new constitution – may not have faded altogether from Nepalese memory. Nevertheless, both countries seem more confident of moving forward to bring back the lost element of trust in India-Nepal relations. This impression is reinforced by not only the optics of the relaxed interaction between Modi and Oli but also the two sides persisting with infrastructure and connectivity projects.

During Modi’s two-day visit to Kathmandu for the 4th BIMSTEC Summit, the two Prime Ministers had official as well as informal discussions spread over three meetings. Their meetings were described as “warm” by Raveesh Kumar, spokesman of the Ministry of External Affairs (MEA). The fact that this had to be explicitly said indicates that this meeting was an improvement over the previous two meetings between the two PMs that had took place after Oli had won a landslide majority to lead the Left Alliance. The first meeting was in April, on Oli’s customary first visit to India after taking office as Prime Minister. Subsequently, in May, Modi had a successful visit to Nepal.

The upturn in bilateral relations was reflected in Modi’s remarks, made after one of the meetings on the sidelines of the BIMSTEC Summit. “Our deliberations were wide-ranging, covering multiple aspects of India-Nepal relations,” said the Prime Minister. “We discussed ways to further deepen our economic, trade and cultural ties. Enhancing connectivity between our nations was discussed as well.”

Both sides also walked the talk by signing a memorandum of understanding (MoU) to build a strategic railway line connecting Raxaul in Bihar to Kathmandu. Modi and Oli also jointly inaugurated a rest house for pilgrims, called Nepal-Bharat Maitri Pashupati Dharamshala, in Kathmandu. Thus, Modi has advanced the “religious diplomacy” he had embarked upon during his visit in May and, in doing so, taken with him his counterpart who belongs to the Communist Party of Nepal.

There was no reference to China, directly or indirectly, during the official or informal discussions. This is significant because Prime Minister Oli has been painted as “pro-China”, particularly by a section of observers and media as he was driven to seek oil and other essential commodities from China during the blockade, perceived to have been enforced by India. Surprisingly, unlike in the past, there was no mention of Oli as “pro-China” in media reports during this visit of Modi. This reflects the altered perception of the relationship in the last few months.

Till as recently as last April – before Oli’s election victory and visit to India – there was a marked hostility in India-Nepal relations. The economic blockade had changed the relationship for all time, with both countries joining issue in the United Nations, and Prime Minister Oli describing the blockade as “an act of inhumanity worse than war”. India has persistently denied Nepalese accusations of imposing the undeclared blockade by pointing out that the supply disruptions and shortages were enforced by the Madhesi agitators inside Nepal.

In the aftermath, Oli was ousted as Prime Minister, which was also attributed to India. The ensuing elections saw anti-India rhetoric raised to an unprecedented level. Oli’s electoral success was seen as Nepal having avenged itself against India and, there was much holding back and uncertainty even after Oli’s return as Prime Minister. An ice-breaking visit by External Affairs Minister Sushma Swaraj paved the way for mending relations. Her charm offensive was followed by Oli’s visit to India in April which saw both sides dealing with each other in a correct and business-like manner bereft of the warmth and bonhomie that has characterised interactions between leaders of the two countries.

All the same, there were productive discussions with both sides realising that the relationship cannot be allowed to worsen any further. Oli, a Communist, had to relent and accept that though Nepal is avowedly a secular republic, it cannot but submit to strengthening Hindu religious bonds between the two nations. Subsequently, in May, Modi’s visits to temples in Nepal were supported actively by the Oli government. This showed that the Nepalese political leadership is no longer set against New Delhi’s ‘Hindu agenda’, whether as a matter of tactical retreat or strategic accommodation.

Whatever the reason, beyond a point, Nepal’s ruling class cannot resist Indian intent and influence. Any attempt to do so would spell political instability, which is the last thing Oli wants, for after 1991 – when Nepal ushered in multi-party democracy – this Left Alliance government is the first one that looks like lasting its term and pursuing economic development with growth and equity.

New Delhi is also all too aware that any attempt to dictate Nepal’s relations with China would, instead of weaning Kathmandu away from Beijing, have the opposite effect of driving it deeper into the Chinese embrace.

Thus, India-Nepal relationship, now shorn of its sentimental and romantic aspects, is firmly cast on a new course. On this path it is pragmatism, mutual interest and business-like considerations of development, especially infrastructure and connectivity, that would prevail.  That is a practical basis to continue the efforts to bring back trust to the relationship.