Opinion: 'Made in India' aircrafts and better-trained pilots are crucial to avoid crashes 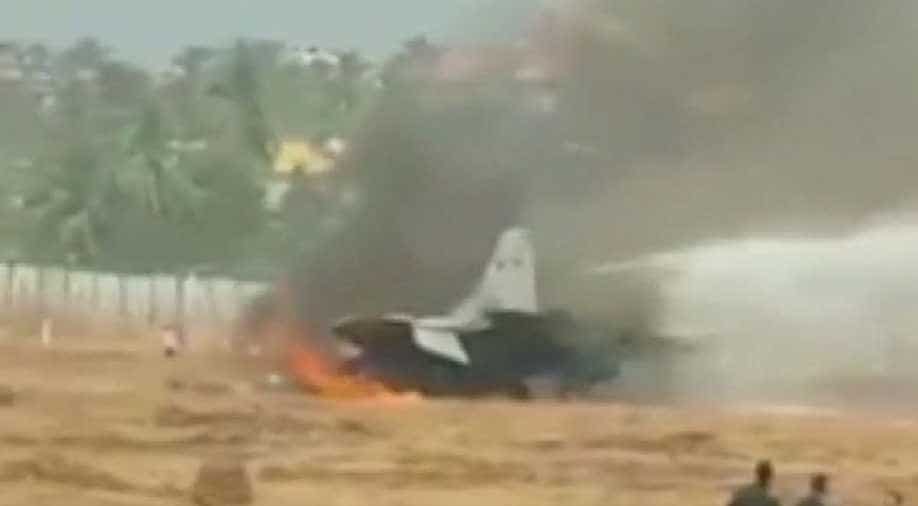 The fire on the aircraft is being extinguished. Photograph:( ANI )

India Inducted its first MiG 29K in 2009 after a deal with Russia for the supply of naval version of a multi-role Fighter. The Indian Fleet of Sea Harrier was aging and needed an immediate replacement. The initial lot of 12 MiG 29K were delivered in 2009-10. Subsequently, India ordered more, and currently holding about 45 of these flying machines. India is the only country operating these aircrafts outside Russia.

The aircrafts operate from two bases; “INS Vikramaditya” which got inducted into the Indian Navy in 2013 and INS Hansa which is a naval air base at Goa. Goa Airport is one of the many stations in India where civilian and military aircrafts use the same runway strip. The INS Hansa is an important naval base which holds 8 of the major naval air squadrons of India. It includes two squadrons of Mig 29K, few Mig 29KUB which are twin-seater trainer version of MiG 29K, one squadron of IL-38 anti-submarine aircraft, one each for HAL Chetak and Kamov 31AEW helicopters and two trainer squadrons. It is the base where navy pilots are trained in handling advanced naval aircrafts.

Recent accident of MiG 29K at Goa is significant because it is the first accident of this aircraft since it was inducted 8 years back. Not only this, the twin-engine aircraft is considered extremely safe and, till date, only two accidents have been recorded in Russia. One was in 2011 when the aircraft was under testing and these kinds of crashes are not uncommon. The second one crashed into the Mediterranean Sea at the time of landing over Russian aircraft carrier “Admiral Kuznetsov”. This was when the aircraft was returning after successfully completing a mission over Syria and the primary reason was tearing off of the landing cable due to which the aircraft had to be in the air for more than the desired time frame.

The single-seat variant made for India is different from the existing MiG 29 operated by the Indian Air Force and is, especially, developed for carrier-based operations. This supersonic fighter has a wing folding mechanism due to which it can be stored at an aircraft carrier in lesser space, resulting in the deployment of more number of aircrafts. This is a fourth generation aircraft and can operate in a range of about 1500 kilometres from the carrier. Hence, it can dominate the seas in a better way. It has advanced radars, advanced fly by wire avionics, electro-optical targeting system and can carry a load of over 5.5 tonnes to include a variety of armaments and equipment, making it an undisputed king of the high seas.

So, what caused the accident of this machine which is considered quite safe?

The Indian Navy has already launched a Court of Inquiry into the case and the exact reason will be known later but as of now the prima facia reason is that the aircraft skidded off the runway due to some technical error, caught the fire and, most importantly, a trainee pilot was flying the same.

In my opinion, this accident happened because of human error. First, the aircraft was piloted by a trainee pilot with less experience in handling this machine. Second, the aircraft skidded off the runway in the initial takeoff effort, and this may be due to steering failure. Thus, there is a higher possibility of human failure than a mechanical one.

India has lost over 70 military aircrafts, including helicopters and precious lives of 80 people in accidents since 2014, which is quite serious. While human error cannot be ignored in some of these cases, the mechanical failure constituted the reason of more than half of the failures.

India operates a large inventory of aircrafts from various sources and, in some cases, integrated the technologies of different countries to make its own system. While spares and services are an issue, the aging fleet needs a complete revamp which the government should focus on.

The SU-30MKI, considered the most advanced fighter aircraft of the Indian airforce, was also inducted in 2002. 15 years have gone by but, as of now, we don’t even have a replacement of our aging fleets of Jaguar, MiG 21s, MiG 29s and Mirage 2000. Buying expensive systems like Rafael will only give temporary relief. We have still not advanced enough in the direction of our indigenous multirole aircraft.

Surprisingly, India inducted its first indigenous supersonic aircraft (HAL HF-24 Marut) in 1967 and, since then, our own aircraft programme had been experiencing delays. At the time when Pakistan has already started exporting its J-17, HAL Tejas is not even fully operational and there are a lot of dark areas in its performance. Though DRDO tried to Indianise most of its parts, however, we are still looking at other countries, particularly, Israel and the USA for its critical parts like radar, avionics and engine.

It will be shocking to you that the LCA program was conceived and approved by the government in 1983. Even after 35 years and an expenditure of over 11,000 crores, we don’t have the operational aircraft in our hands.

The future of Indo-Russian Project of Fifth Generation Fighter Aircraft is still not clear. While Russia already started inducting the system at its end, we have not moved ahead even an inch. The project is significantly delayed and gone into the abyss of uncertainty.

It is high time that the government takes this matter seriously. Not only the indigenisation of our aircrafts but the training of pilots need special attention. India cannot afford to lose precious lives and war machines just like that.