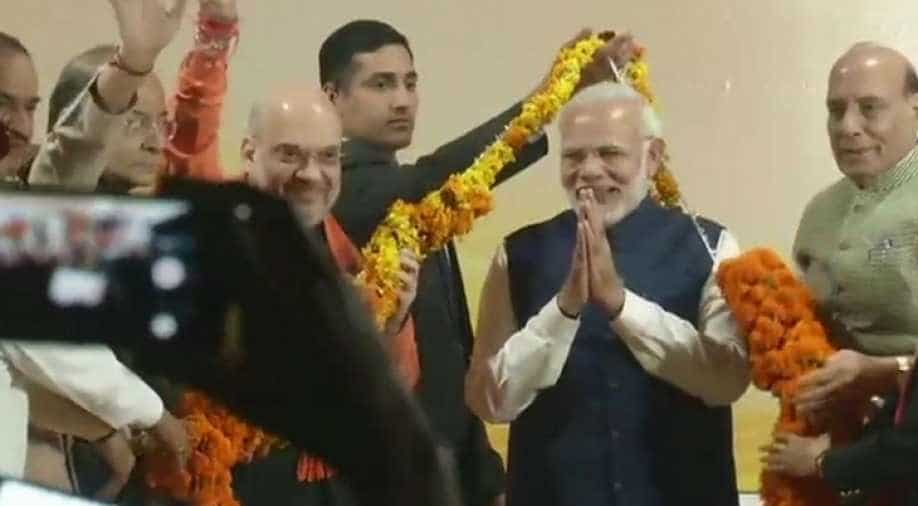 Until about 11 in the morning today, it was not just the Bharatiya Janata Party but also the exit pollsters that were a worried lot. The Congress had gained leads in a significant number of seats in the Gujarat Assembly election result, while the BJP was trailing. But then the trend changed and the BJP surged ahead, and maintained the lead to the end. All said and done, after cutting through various arguments and counter-arguments and nuanced commentaries, the truth was: The BJP had retained Gujarat for a sixth term and the Congress had lost the best opportunity it had in two decades to unseat the ruling party.

Both victory and defeat are a result of a combination of factors, and the Gujarat outcome too is no exception. The biggest factor has been the leadership. Both the national parties did not have a chief ministerial candidate, and so they had to depend on their central leaders to work the magic. Prime Minister Narendra Modi and Congress president Rahul Gandhi found themselves pitted against each other in the State, and the former has emerged victorious.

What went right for Modi and wrong for Rahul Gandhi? That can be debated endlessly, but the fact is that the Congress’s juggernaut of defeats shows no sign of halting — the party has lost Himachal Pradesh too, and by a massive margin — just as the BJP’s winning spree remains on course.

The Congress can claim consolation from the following two facts. The first is that its vote-share has gone up as compared to 2012; it has been around 44 per cent. And the second is that the party has secured more seats than it did in the last Assembly election. But it’s also a fact that the BJP’s vote-share too has been boosted as compared to the previous election— it stood at about 50 per cent. The ruling party’s seat tally has admittedly gone down, but the situation would have been worse had the BJP not been able to compensate for its losses in certain segments of the voters from gains elsewhere.

It’s interesting that even as the Congress improved its performance, many of its senior local leaders, including Shaktisinh Gohil, Siddharth Patel and Arjun Modhawadhia, lost the battle. On the other hand, Chief Minister Vijay Rupani and Deputy Chief Minister Nitin Patel triumphed from constituencies which analysts had believed were this time lost for the party. Rupani contested from Rajkot (West) and Nitin Patel from Mehsana, and both these regions were said to harbour strong anti-BJP sentiments on account of the Patidar agitation.

In leadership terms, while the BJP depended on Modi for the winning connect with the voters and party president Amit Shah for strategy, Rahul Gandhi had to look for additional support from the trio of three caste leaders — Hardik Patel, Jignesh Mevani and Alpesh Thakur. It can be said that this strategy did work for the Congress, but in a very limited sense.

While the party gained considerable ground in Saurashtra — in fact, this was the only region where Congress was on the course to winning more seats than the BJP — on the strength of the Patidar votes, it had to pay a price through the loss in support of the tribal and the Scheduled Caste voters. And while the Congress made mild gains in central, north and south Gujarat, they were simply not enough and the BJP maintained its hegemony in those regions. Clearly, voters were not too happy with the Congress’s brazen caste politics.

It should also be kept in mind that while the Patidar votes effectively split and caused damage to the BJP given that the party had a complete hold over this community in the 2012 poll, all was not altogether lost. According to a survey, while the result was pouring in, the BJP managed to gain significantly in a majority of the 39 seats where the Patidar factor was decisive.

If the Patidar factor fetched limits gains for the Congress, the party’s diatribe against the implementation of the Goods and Services Tax (GST) failed to work. The BJP swept the commercial cities of Surat, Ahmedabad and Rajkot — in all of which the trader community was reportedly upset with the ruling party on the issue and supposedly planning to vote against the BJP. The development reminds me of the remark that a businessman in Mehsana had made when I asked him about GST: “We may be upset but that does not mean we will vote against the BJP.” The BJP can now claim with confidence that the voters of Gujarat have endorsed GST and demonetisation.

The BJP has reason to celebrate, given that it has emerged victorious in the face of the most determined onslaught by the Congress in decades and a caste-combination that positioned itself against the ruling party. However, the party cannot brush under the carpet trends that are worrisome for it.

The Bharat-India divide was evident in the State election result. Of the 98 seats that fall in rural Gujarat, the majority went to the Congress, while the BJP swept the 53 urban seats. It is evident that the farmer’s distress worked against the BJP. Whether the farmer discontent is perceptional, given that the party has been repeatedly saying that agricultural growth in the State has touched 10 per cent over the last five years, is immaterial. If the party does not handle the rural discontent, it could face bigger challenges in the 2019 Lok Sabha poll.

Similarly, the party has to find ways to win over the Patidar community. Hardik Patel appeared belligerent at a Press conference this afternoon, refusing to accept the BJP’s win and claiming that the victory was the result of rigged electronic voting machines. More importantly, he has announced a re-invigorated agitation for reservations. The party cannot depend on a split Patidar community to see it through every time or see its narrative of development alone to fetch triumphs.

Having blown away a golden opportunity, the Congress, now formally led by Rahul Gandhi, needs to re-evaluate its strategy. It’s possible that voices will emerge, yet again, of a grand coalition to take on the Modi-led BJP. Will that happen, and will the potential partners accept Rahul Gandhi’s leadership, only time will tell.