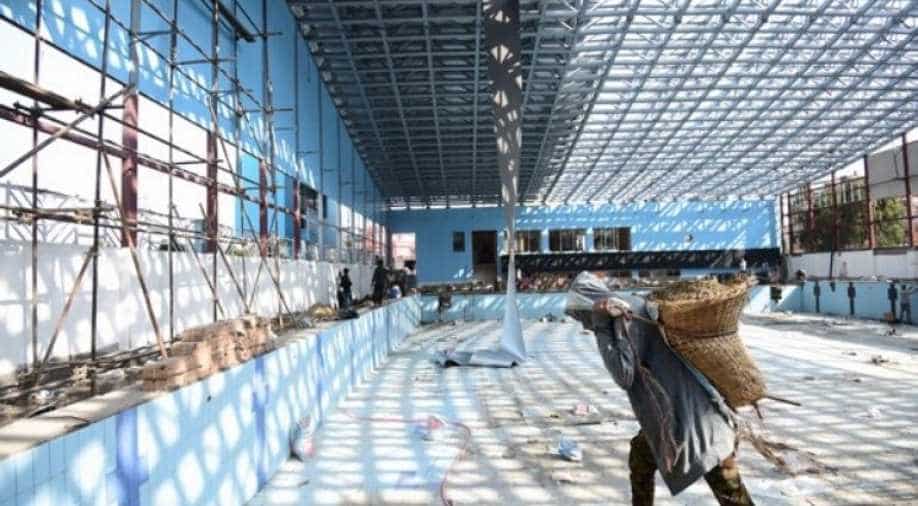 The construction work at the Dasarath Stadium in the Nepali capital is yet to be completed even though the opening ceremony of the 13th South Asian Games will kick off this weekend.

Sanjeev Kumar Pathak, Project In-charge, Dasarath International Stadium which is hosting the opening ceremony of the South Asian Games this weekend pointed to a late assignment of the contract as a reason behind the delay.

"We cannot say it has been delayed because the agreement for this project was made seven months before only. This is a design-based-project, there should be design, then after the materials need to be approved, take the works forward; these factors are present there and we are completing these constructions within seven months, so it cannot be termed delayed," said Sanjeev Kumar Pathak, the project-in-charge of Dasaratha International Stadium.

"On the basis of percentage; weight-age we have completed around 85 per cent of the work. The main visible work is that of roofing because of which it might be the cause for us to be unable to justify," Pathak added while speaking to ANI.

The Dasaratha Stadium, the only international stadium in the Himalayan country, is still under construction with the work of the VVIP parapet still underway. The games have previously been postponed thrice due to untimely completion of the infrastructure work of the stadium.

Sounds of hammering, drilling, wielding still continue at the ANFA Complex in Satdobato to complete the new swimming facility, where a swimming competition is scheduled to be held from December 5.

Tiles are yet to be laid on the floor of the swimming pool which is sure to take at least a week after completion to dry, after which comes the process of filling the pool with 900 thousand liters of water and heating it which would take least 60 hours.
On November 12, Member Secretary of National Sports Council, Ramesh Silwal had publically announced the completion of the swimming pool by the third week of this month.

Silwal had also claimed that the Dasarath International Stadium would be completed by November 21, however, the ground reality seems to narrate a different tale entirely.
The South Asian Games are scheduled to take place in Nepal from December 1 to December 10.

This is the third time Nepal is holding the games. A total of seven nations have confirmed their participation in the tournament which will be held in Kathmandu and Pokhara cities of the Himalayan nation.