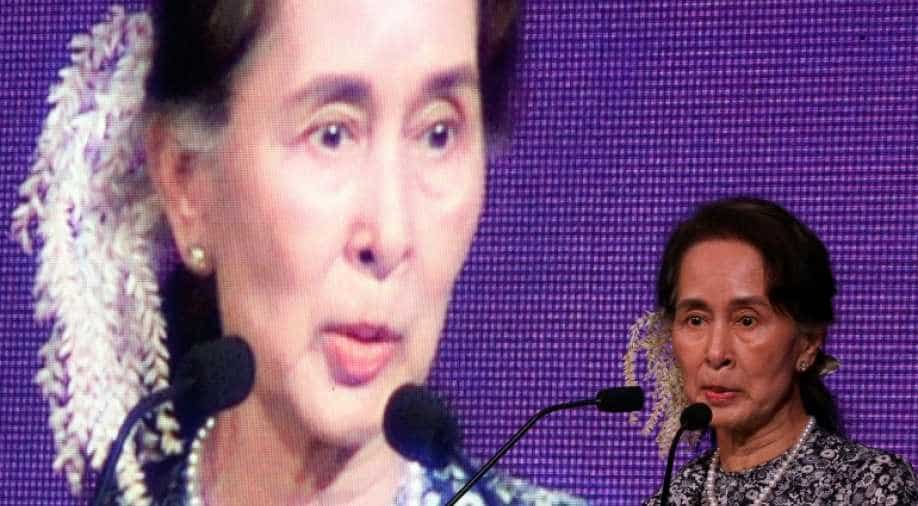 Aung San Suu Kyi is a former political prisoner who was awarded the Nobel Peace Prize in 1991 but her reputation has suffered badly in recent years.

Myanmar's de facto leader Aung San Suu Kyi, who has been criticised by the West over the government's treatment of Rohingya Muslims and other human rights concerns, is scheduled to speak at the United Nations in Geneva next week, a UN official said on Thursday.

Her itinerary has not been made public but it could coincide with that of UN Secretary-General Antonio Guterres, who will open the UN Human Rights Council session on Monday, presenting the chance of a rare meeting.

Suu Kyi is a former political prisoner who was awarded the Nobel Peace Prize in 1991 but her reputation has suffered badly in recent years.

Her government's relations with the United Nations are tense following the Rohingya crisis. It has banned the UN special rapporteur on human rights in Myanmar, Yanghee Lee, from coming to the country and Suu Kyi's administration has opposed raising the profile of the UN resident coordinator in Myanmar.

She has largely shunned travel to the West since the Rohingya crisis broke out in 2017 but she and senior officials in her administration travel regularly within Asia.

Suu Kyi is listed as a speaker at the Conference on Disarmament in Geneva next Wednesday, but UN officials were not immediately able to confirm any other details of her trip.

About 730,000 Rohingya Muslims have fled from Myanmar's Rakhine State into Bangladesh since a military crackdown in 2017 after Rohingya insurgents attacked security posts.

A UN mandated fact-finding mission said that Myanmar's military carried out mass killings and gang rapes of Rohingya with "genocidal intent" and called for generals to be prosecuted. Myanmar rejected the findings.

Myanmar government spokesman Zaw Htay did not respond to calls seeking comment and diplomats at Myanmar's mission in Geneva were not immediately available.

Last year Suu Kyi visited Australia, Japan, Singapore, Vietnam and Nepal, and she came to Switzerland in 2012, visiting the Swiss government in Bern and the U.N. and the International Labour Organization in Geneva.