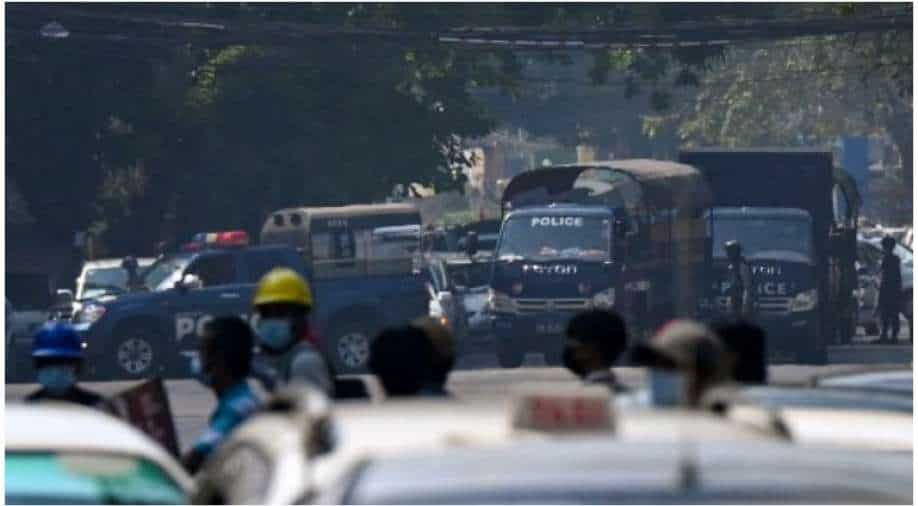 Police vehicles are seen in Yangon on February 28, 2021 as security forces continue a crackdown on demonstrations by protesters against the military coup. Photograph:( AFP )

The build-up of forces was effected on Sunday as protesters started gathering in different parts of the country. The protesters gathered after an online call for protests

Myanmar security forces continued their crackdown and violently dispersed ant-coup protesters on Sunday. Three protesters were killed as per local media. Police and soldiers had already fired rubber bullets, tear gas and water cannon on demonstrations in recent weeks in an effort to bring the civil disobedience campaign to heel, with live rounds used in some isolated cases.

The build-up of forces was effected on Sunday as protesters started gathering in different parts of the country. The protesters gathered after an online call for protests.

Three men were killed and at least 20 others injured when security forces moved on a rally in the southern coastal hub of Dawei, according to a volunteer medic and local media reports.

Pyae Zaw Hein, a rescue worker, told AFP the trio had been "shot dead with live rounds", while the injured had been hit by rubber bullets.

"There could be many more casualties as well because more wounded people keep coming in," he added.

Local media outlet Dawei Watch confirmed that three had died in the incident.

Officers in the commercial hub Yangon began dispersing one crowd in the downtown area minutes before the slated beginning of the day's protest, but it was unclear whether they used live rounds.

"They didn't say a word of warning. Some got injured and some teachers are still hiding in neighbours' houses."

Meanwhile, Myanmar's military regime on Saturday fired Myanmar's envoy to United Nations Kyaw Moe Tun just a day after he made an impassioned speech in the UN.

In his speech, Tun implored international community to act against the military junta that toppled the democratically elected government of Aung San Suu Kyi in a coup on February 2021. He even made the three-fingered salute that has come to symbolise the spirit of Myanmar's anti-coup protests.