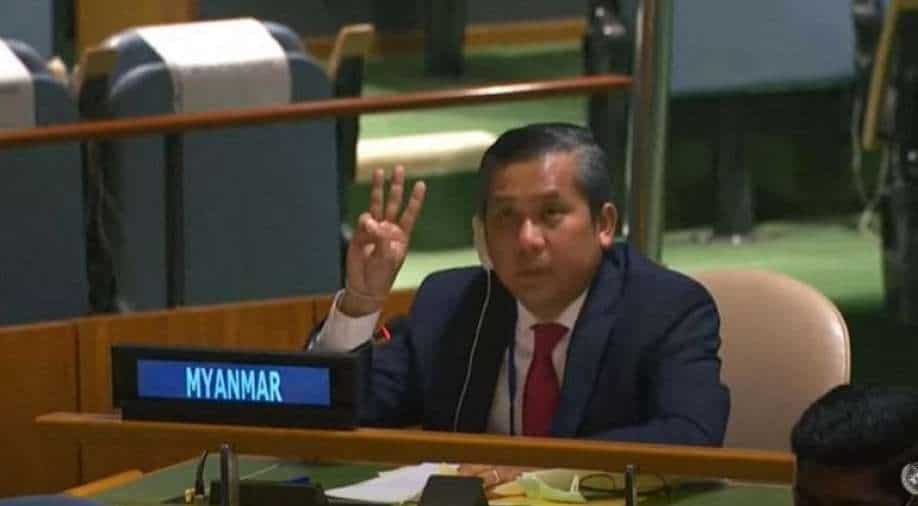 On Friday, Myanmar's envoy to the United Nations Kyaw Moe Tun, in an emotional appeal, asked the international community to take 'the strongest possible action... to restore democracy'

Myanmar's military, which has taken control of the administration, has fired its United Nations ambassador on Saturday after he delivered a strong and emotional speech to oust the democratically-elected government and leader Aung San Suu Kyi.

Police and security personnel have started using violent tactics, such as rubber bullets, tear gas to suppress massive anti-junta protests that are being organised in the country for several weeks.

The protesters are demanding the restoration of democracy and the release of Suu Kyi.

On Friday, Myanmar's envoy to the United Nations Kyaw Moe Tun, in an emotional appeal, asked the international community to take "the strongest possible action... to restore democracy".

"This revolution must win," the ambassador said, flashing the three-finger salute that has become a symbol of freedom and democracy.

Myanmar's state television on Saturday announced that the envoy had been fired for betraying the nation.

"(He) didn't follow the order and direction by the state and betrayed the country," as per the MRTV broadcast.

"That is why he is revoked from his position starting from today."

Meanwhile, on Saturday, police continued their crackdown on pro-democracy protesters by carrying out mass arrests and firing rubber bullets on peaceful demonstrators.

In the city of Yangon, police used rubber bullets against the protesters who were gathered in Myaynigone junction.

Demonstrators scattered into residential areas and used makeshift barricades made out of stacked tables and trash cans to negate the police action, news agency AFP reported.

Several people wore hard hats and gas masks to protect themselves from violence.