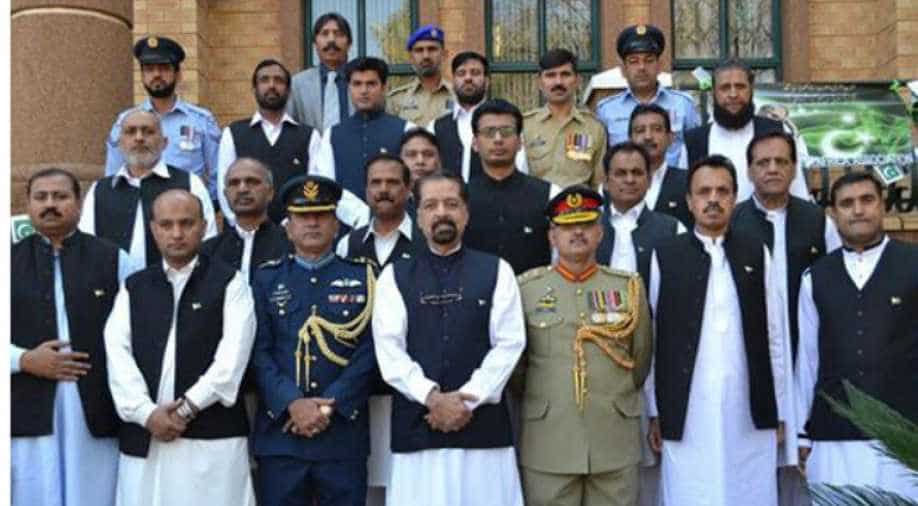 Muttahida Qaumi Movement's (MQM) Coordination Committee Convener Dr Nadeem Ehsan said that MQM has nothing to do with gangsters from South Africa. The paramilitary Rangers had fraudulently claimed they belong to MQM South Africa chapter.

In fact, that notorious scheme was part of ongoing tricky business of the military establishment for maligning the MQM.

However, the scheme has badly flopped and the establishment was exposed after real facts and details about the South African gang have been made public by the MQM.

The paramilitary Rangers are thus hiding their faces after having been exposed by the MQM. The Convener said this in a press video briefing and was flanked by members of the Coordination Committee. He said that the establishment is constantly placing the MQM under misleading and hate-mongering media trial but has utterly failed in its malicious agenda.

The recent activity of the establishment in which it staged a drama of unearthing a large cache of arms and ammunition and alleged the MQM had owned it has flopped.

As a matter of fact, the arrested gangsters have never been in MQM as workers or under any category but they are in real gangsters belonging to Punjab.

They are Rana Zahid, Ali Bhatti, Ali Rashid and Atique Billa. These criminals belong to a gang of criminals based in Johannesburg in South Africa. They are involved in heinous crimes such as murder, kidnapping for ransom, smuggling and other crimes.

Dr Ehsan said that, as far as Shuja Ud Din Bobbi is concerned, the MQM had ousted him from the Movement on Jul 28, 2018, and Pakistani and international media was properly informed through the official release.

"As far as the MQM South Africa is concerned, is a strong forte of the MQM and strictly follows the discipline of the MQM."

The MQM Coordination Committee Convener Dr Ehsan said that, "Unearthing the concealed cache of arms and ammunition by the paramilitary Rangers from different houses in Azizabad is just a flopped scheme."

The paramilitary Rangers are enjoying complete control over that area since August 22, 2016.

The paramilitary Rangers have during past a decade raided thousands of houses but they faced no resistance which is proof that the MQM and its designees and workers are purely political and non-violent.

Henceforth, the military establishment and its paramilitary forces and intelligence agencies should stop maligning the MQM as their every maligning act against the MQM has bounced back with sheer humiliation.