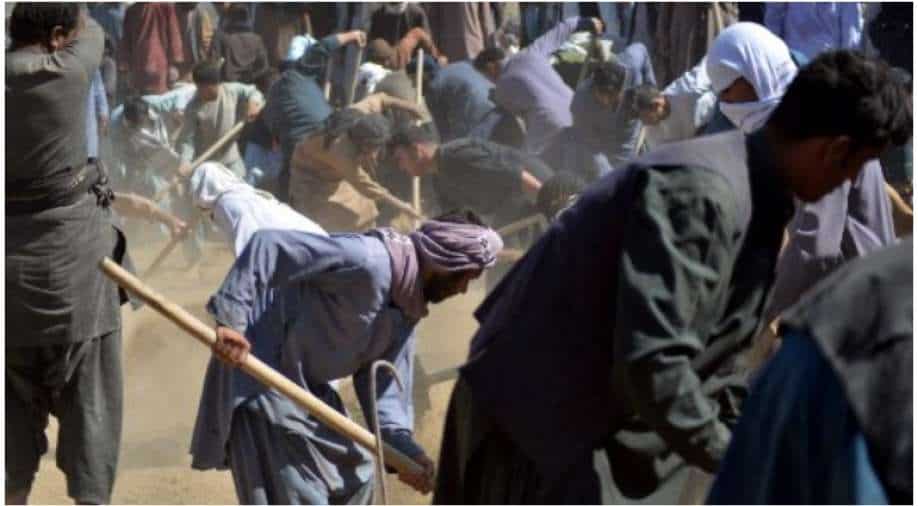 People were seen digging row after row of graves in Kandahar on October 16 Photograph:( AFP )

Mass burials took place in Kandahar a day after deadly suicide bomb attack that killed dozens of people in a Shiite mosque on Friday. The death toll reached 60 on Saturday. Islamic State-Khorasan (IS-K) has claimed responsibility for the attack.

Hundreds of diggers were seen digging row after row of graves in the city.

The latest massacre came just a week after another IS-claimed attack on Shiite worshippers at a mosque in the northern city of Kunduz that killed more than 60 people.

IS-K said in a statement on its Telegram channels that two of its suicide bombers carried out different attacks on different parts of the mosque in Kandahar.

The group, bitter rivals of fellow Sunni Islamist movement the Taliban, who swept back to power in Afghanistan in August as the United States and its allies withdrew, regards Shiite Muslims as heretics.

UK-based conflict analysis firm ExTrac said Friday's assault was the first by IS-K in Kandahar, and the fourth mass casualty massacre since the Taliban took Kabul.

Researcher Abdul Sayed told AFP the attack "challenged the Taliban claims of holding control on the country. If the Taliban can't protect Kandahar from an IS-K attack, how could it protect the rest of the country?"

At the gravesides, mourner Gul Ahmad told AFP of his grief over his brother's slaying: "He had two little children. He had a home to live in. He had everything. The pain of the loss cannot be described with words."

The all-male crowd brought body after body, shrouded in white sheets, as a dust storm was whipped up by the constant digging.