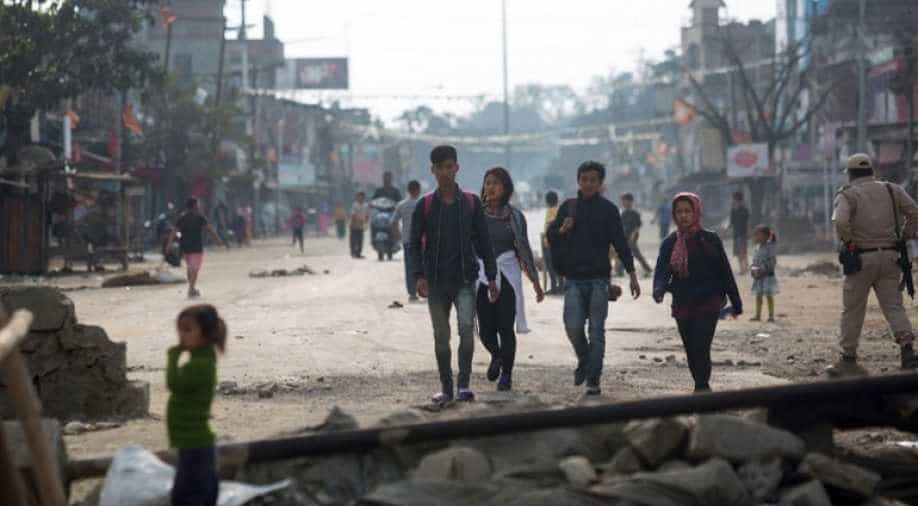 The blockade has cut Manipur off completely. Photograph:( AFP )

Federal Interior Minister Rajnath Singh Wednesday expressed grave concern over the continued blockade of a national highway in Manipur which has caused severe difficulties to the people, especially with regard to the availability of essential commodities.

The home minister, who met Manipur chief minister O Ibobi Singh in New Delhi, made it clear that if the government of Manipur failed in its constitutional duties, the federal government would have to explore other measures under the provisions of the Indian Constitution to ensure that difficulties of people were alleviated.

Rajnath conveyed that continued blockade of National Highway (NH-2) is likely to adversely affect democratic process in the forthcoming elections by hampering movement of people, including election officials.

Election to the 60-member Manipur assembly will be held on March 4 and 8.

The Ministry of Home Affairs has been making repeated efforts to find a way to have the NH-2 opened. On November 15, 2016, tripartite talks with government of Manipur and United Naga Council (UNC) were called at New Delhi to discuss the economic blockade, which were not attended by Government of Manipur, an official of the federal home ministry said.

On December 22, the home minister wrote to the chief minister to discharge his constitutional obligations of keeping National Highways open and ensure supplies of essential commodities.

Despite the repeated efforts of the Ministry, nothing substantive seems to have been done to remove the economic blockade, the home minister told the chief minister.

Rajnath said that it is the constitutional obligation of government of Manipur to maintain public order in the state including maintenance of essential supplies and conducive atmosphere for holding elections.

He asked the Chief Minister to discharge this obligation responsibly, in the interest of people of Manipur.

The blockade has cut Manipur off completely, since most supplies enter the state on those two highways.

The UNC put up the blockade on November 1 after the Manipur government announced the formation of seven new districts, taking the total number of districts in the state to 16.

The Nagas allege two of the new districts -- Kangpokpi and Jiribam -- will snatch their ancestral lands away from them.