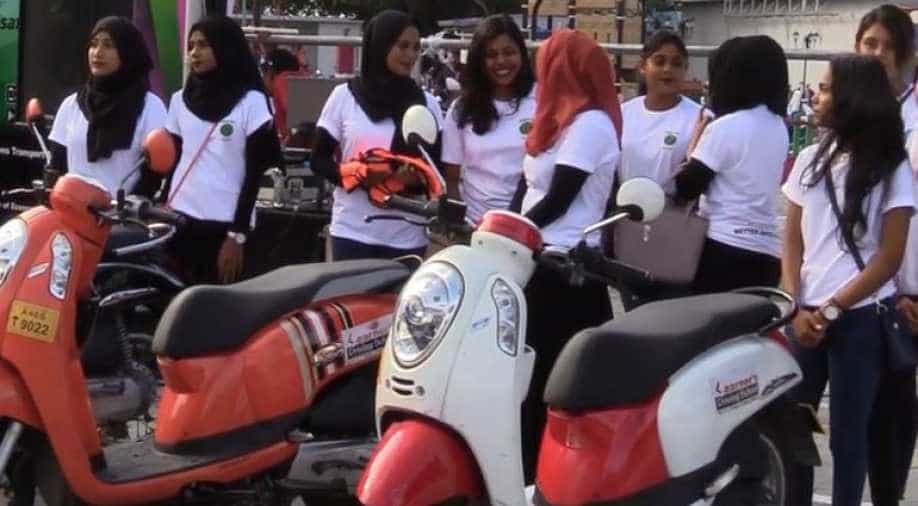 One of the unique features of this new service is its focus on involving women as drivers. Photograph:( WION )

The capital city of Maldives, Male is one of the most densely populated cities in the world. In crowded Male, finding a taxi can often be a difficult prospect. To improve the public transport system within the city, Maldives has recently introduced a new service called "Cycle Taxi".

There are around 800 cars registered as taxis in the city. But these invariably are never enough, given that a large number of locals and tourists depend on taxis for commuting. Taking this into account, the Maldives government approved this new service, allowing motorcycles to ply as taxis.

Mohamed Saeed, the minister of economic development of the Maldives told WION this new concept is a very suitable one for a small city like Male.

"The demand from the public is to have more efficient, reliable, and speedy public transport. So we have made some consultations with the public key stakeholders and we believe in a place like Male; especially for a small island city this service will bring a major difference," he said.

Since many women would prefer a woman driver while using the motorbike taxi service, women involvement has been encouraged by the authorities. (WION)

"All our drivers are well monitored with criminal records checked, and even medically checked, also our drivers are given health training. In case of any emergency on the road they will be able to attend those customers as well." he said.

One of the unique features of this new service is its focus on involving women as drivers. Since many women would prefer a woman driver while using the motorbike taxi service, women involvement has been encouraged by the authorities.

"We have seen a number of girls taking initiatives to join this service. So I believe it is a beginning, as the days go by we will have more demand," said Saeed.

"Especially young girls have joined our team. So this is hopefully going to be a new trend in our small cities of Maldives where people will be able to get such a service on their fingertips," said Bassam.

The Maldives government believes that the motorbike taxi service can ease the pressure on public transportation in Male. (WION)

One such women driver is Zilmiya, who believes that the service provides women with a good opportunity to earn an income.

"I think if you have time, it's a profitable work for women. There are many girls unable to find taxis, to go to school or office. so its a good work for women. My friends are very supportive. they say they will call me for rides."

The Maldives government believes that the motorbike taxi service can ease the pressure on public transportation in Male. If that is the case, the authorities are hoping to expand the service to other parts of the country as well.