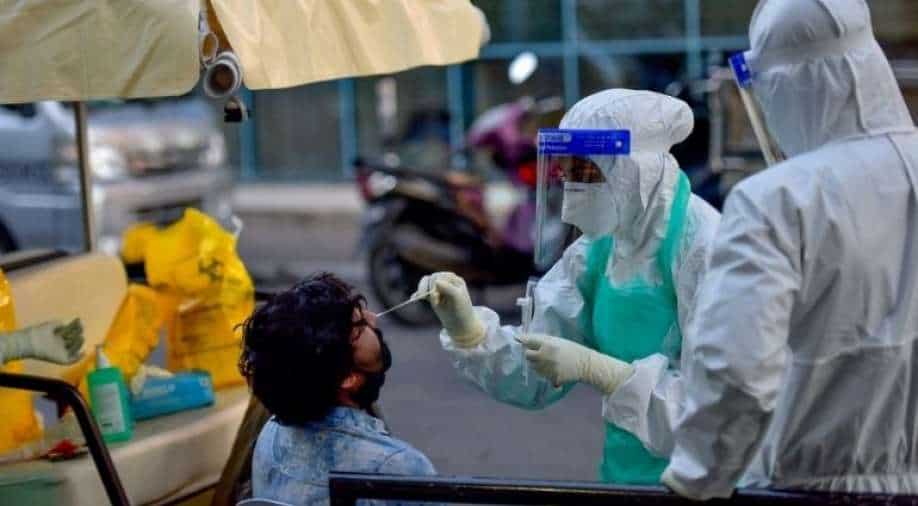 A medical worker (C) wearing full protective gear takes a swab sample from a man to be tested for the COVID-19 coronavirus on a street in Male on June 5, 2020. Photograph:(AFP)
Follow Us

The Maldives, whose economy relies on tourists visiting its pristine atolls, has suffered a more than 15-fold increase in daily infections in the past week

The Maldives on Wednesday banned travellers from across South Asia in a bid to contain surging COVID-19 infections despite having one of the world's most successful vaccination roll-outs.

Sri Lanka and other countries in the region have also imposed travel restrictions as they battle a new wave of the virus that has hit India and its neighbours.

The Maldives, whose economy relies on tourists visiting its pristine atolls, has suffered a more than 15-fold increase in daily infections in the past week.

The Indian Ocean nation, which halted international flights for more than three months last year, saw a record single-day rise of 1,500 cases on Tuesday, compared with less than 100 just one month ago.

Authorities said tourist arrivals from the key Indian market and other South Asian countries would stop from Thursday. They have already banned the entry of foreign labourers from around South Asia except for health workers.

Anyone who has only transited through South Asia would also be included, it added.

Indians have been the largest single group of visitors to the Maldives this year. Bollywood stars such as Alia Bhatt and her partner Ranbir Kapoor are among celebrities to have been pictured using the country as an escape from the pandemic.

Travellers from other countries are still permitted to travel to the Maldives with a negative coronavirus test but are not allowed to have contact with the local population.

A curfew from 9 pm to 4 am has been extended to start at 4 pm as part of measures to counter the virus.

Neighbouring Sri Lanka has also announced a night curfew until the end of the month and ordered a three-day shutdown from Friday as part of its anti-virus campaign.

People have been banned from travelling outside of their home provinces after medical experts warned Sri Lanka's healthcare system could collapse unless immediate lockdown measures were implemented.

About 60 per cent of the Maldives' resident population of 515,000 has received a shot, one of the world's highest figures, but less than a quarter have had two injections, a top UN official said.

But the UN Resident Coordinator in the Maldives, Catherine Haswell, told AFP that more than half the population aged between 18 and 29 were yet to receive the first jab.

"At least 80 to 90 percent of the population needs to vaccinated with both doses to reach herd immunity," Haswell said.