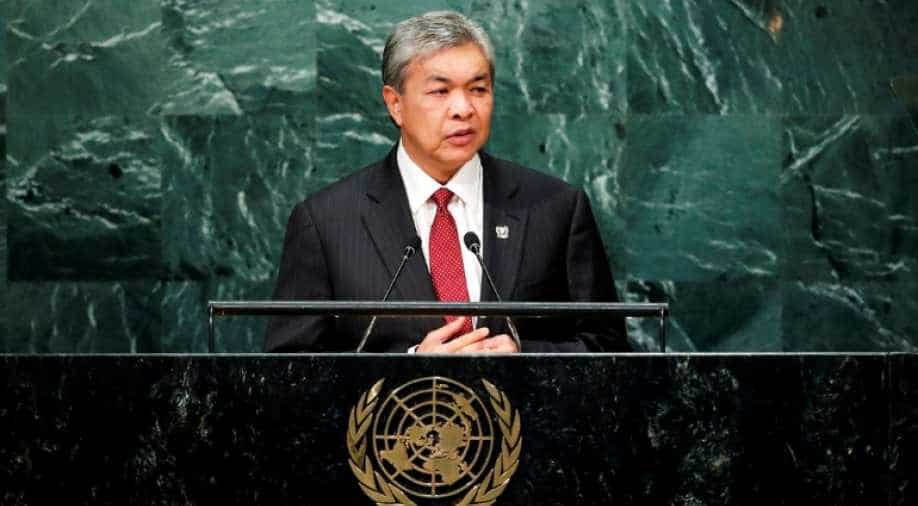 He was also charged with 27 counts of laundering about 72 million ringgit ($17.3 million).

Ahmad Zahid leads the opposition as president of the United Malays National Organisation (UMNO), the once-powerful party that ruled Malaysia for 60 years before being ousted in a shock general election defeat in May.

He is the latest former high-ranking official to be charged for suspected graft, as authorities ramp up investigations into how billions of dollars allegedly went missing from state coffers.

Ahmad Zahid was brought to a Kuala Lumpur court and charged with 10 counts of criminal breach of trust and eight counts of abuse of power involving sums totalling 42 million ringgit (US $10 million), the Bernama news agency reported.

He was also charged with 27 counts of laundering about 72 million ringgit (US $17.3 million).

Each charge carries lengthy jail terms of up to 20 years, with fines of up to five times the value of the illegal transactions, for the money laundering and abuse of power offences.

He pleaded not guilty to all charges, Bernama said.

Ahmad Zahid, also a former home minister, was accused of using his position to receive bribes in exchange for helping companies win contracts for ministry projects, the news agency reported.

In one case, he was alleged to have accepted 6 million ringgit (US $1.4 million) from an official of a company that had secured a five-year government contract to supply 12.5 million electronic chips for Malaysian passports.

He was also accused of misusing funds from his family-run charity foundation, Bernama said.

Ahmad Zahid had earlier denied allegations of using the foundation's funds to settle credit card debts for himself and his wife, saying the payments had been made in error by an aide.

The charges against Ahmad Zahid are not related to a multi-billion dollar scandal at state fund 1Malaysia Development Berhad (1MDB) that led to the former ruling coalition's shock election defeat in May.

US authorities say more than US $4.5 billion was misappropriated from 1MDB, and nearly US $700 million from the fund was diverted into the personal bank accounts of ex-premier Najib Razak.

Najib and his wife, Rosmah Mansor, face multiple money laundering and corruption charges linked to 1MDB. They have pleaded not guilty, with Najib's trial slated to begin next year.