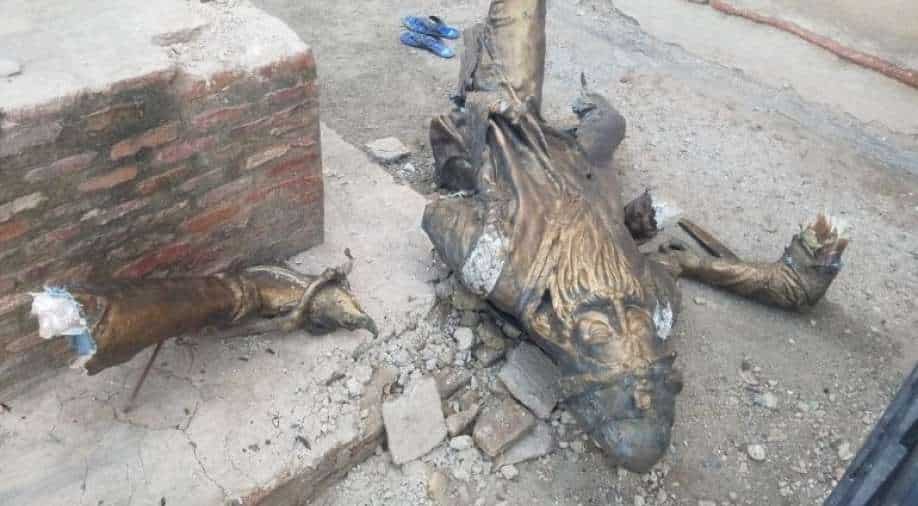 The Lahore Fort's administration said that strict action would be taken against the accused. Photograph:( Twitter )

A nine-feet tall cold bronze statue of the first Sikh ruler Maharaja Ranjit Singh was on Tuesday vandalised by an activist of the banned Tehreek-e-Labbaik Pakistan (TLP) at the Lahore Fort in Pakistan’s Punjab province.

This is the third time the Maharaja's monument has been vandalised at the high-security Lahore Fort complex.

The accused could be seen screaming slogans, breaking the arm of the statue, and removing Singh's bust from the horse and tossing it on the ground before being dragged by another guy, as per the video that has gone viral.

The TLP activist has been arrested by the Punjab police, the Express Tribune newspaper reported. The Lahore Fort’s administration said that strict action would be taken against the accused.

Pakistan's information & Broadcasting minister tweeted the video and said "Shameful this bunch of illiterates are really dangerous for Pakistan image in the world".

“These are symptoms of a sick mindset. This is an attempt to undermine Pakistan’s assessment," he was quoted as saying in the report. The nine-feet tall statue, made of cold bronze, shows the Sikh emperor sitting on a horse with a sword in hand in complete Sikh attire.

In June of this year, the statue was revealed. This isn't the first time the statue has been vandalised.

Last year, the statue's arm was shattered in Lahore. According to Geo News, it was also harmed in August 2019 by two young guys.

In the early part of the nineteenth century, Maharaja Ranjit Singh founded the Sikh Empire, which controlled the northwest Indian subcontinent.