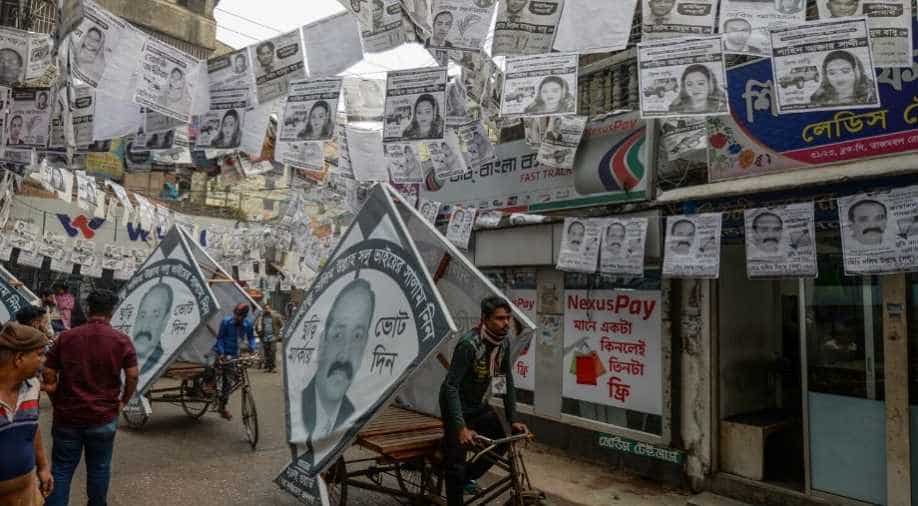 A three-wheeler cart driver carries a portrait of an election candidate on a street adorned with election posters laminated with plastic in Dhaka. Photograph:( AFP )

'The posters will take 400 years to decompose,' says Jamil, General Secretary of the Bangladesh Environment Movement, a campaign group.

Dhaka is awash with millions of plastic-laminated campaign posters ahead of elections in the Bangladeshi capital, and environmentalists are up in arms.

These posters - of which there are an estimated 304 million - will likely end up in sewers, rivers and canals, says activist Sharif Jamil. "If they are burnt, they will pollute the air," he adds.

The city's air quality has been ranked as one of the worst in the world.

"The posters will take 400 years to decompose," says Jamil, who is general secretary of the Bangladesh Environment Movement, a campaign group.

Each contains about two grammes of polypropylene plastic, according to the Environment and Social Development Organisation (ESDO).

Spokesman Hossain Shahriar stated the plastics were non-biodegradable and non-recyclable.

"We will be choking under these plastics since we don't have proper recycling mechanisms in the city," he said.

Also Read: In bid to save key river from pollution, Bangladesh High Court orders 231 factories to shut down

Bangladesh's High Court last week ordered a halt to the production, display and disposal of plastic-laminated posters for the mayoral and council elections, which take place on Saturday.

But to no avail. Black-and-white posters continue to festoon the streets and parks of the congested, cacophonous metropolis of 18 million people.

Manjur Hossain, head of Dhaka City Corporation's waste management department, said they would deal with the waste after the polls.

"We will separately manage it," he added.