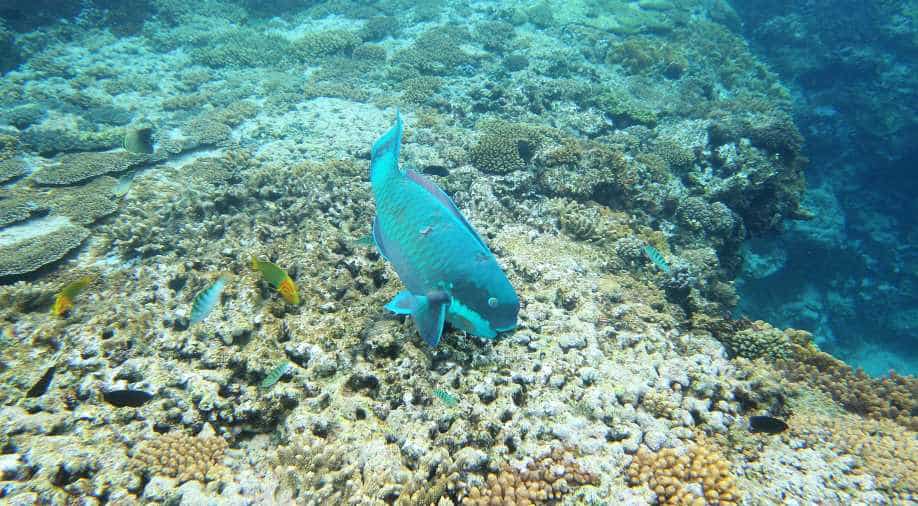 A parrot fish feeds off the coral. Fish are dependent on coral for food and security. Photograph:( Getty )

Kumara urged the government to take urgent measures to save the remaining 10 per cent which, he said, was facing a lot of difficulty due to high-temperature levels.

Sri Lanka is left with only 10 per cent coral reefs in its oceans as 90 per cent of them died due to pollution, illegal fishing methods and excessive climate change, according to Sri Lanka`s state-owned Marine Environment Protection Authority.

Dr Terney Pradeep Kumara, General Manager of the marine authority was quoted as saying that the island nation must take urgent steps to mark the remaining live coral reefs as "highly protected areas" and measures must be taken to move these live corals to deeper seas.

He said Sri Lanka, rich in coral reefs, had lost 90 per cent of its corals in recent years mainly due to illegal fishing methods such as bottom trawling and dynamite blasting, excessive climate change and high levels of pollution dumped into the seas, according to reports.

Kumara urged the government to take urgent measures to save the remaining 10 per cent which, he said, was facing a lot of difficulty due to high-temperature levels.

"Therefore we expect all government agencies, private agencies and all the environmentalists to get together and help the government declare these reefs as highly protected areas and help transfer the living corals to deep areas to keep them alive," he added.

Kumara said that by saving the remaining live corals, they would stay alive for decades which would help Sri Lanka attract more tourists which would strengthen the economy and the biodiversity of the island nation.