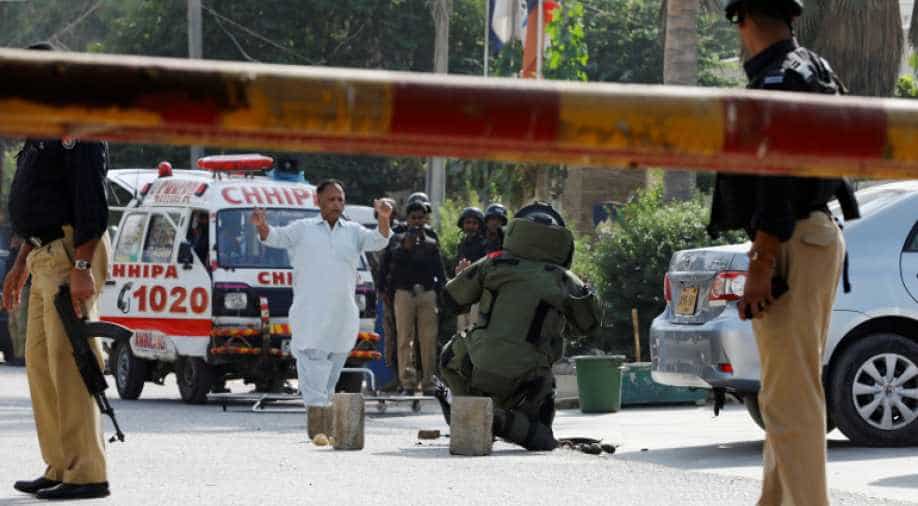 Police officers stand guard as a member of the bomb disposal unit (C) checks a bag with exlosives (unseen), after an attack on the Chinese embassy, in Karachi, Pakistan. Photograph:( Reuters )

A fearless woman officer of Karachi Police, who was once abandoned by relatives in her village for joining a private school, on Friday saved the lives of many Chinese diplomatic staff when heavily-armed terrorists stormed the mission in the Pakistani city.

A fearless woman officer of Karachi Police, who was once abandoned by relatives in her village for joining a private school, on Friday saved the lives of many Chinese diplomatic staff when heavily-armed terrorists stormed the mission in the Pakistani city.

Senior Superintendent Police Suhai Aziz Talpur led the security operation that foiled the brazen attack by members of the Baloch Liberation Army, or BLA, in Karachi.

She ensured the terrorists, armed with nine hand-grenades, assault rifles, magazines and explosives, did not reach the diplomatic staff inside the consulate building. Police said the terrorists were carrying food supplies and medicines, suggesting they had planned to take hostages.

But as soon as they reached the gates of the consulate, the police team took positions and retaliated. Two police officials were killed in the gunfight in which all the attackers were also neutralised.

"When my parents decided to enrol me at a school, most of our relatives started taunting my family. So much so, that my family had to leave our village and move to a nearby town," she told the daily.

Her father Aziz Talpur, a political activist and writer, always dreamt big for his daughter.

"My relatives cut off ties with me because I wanted Suhai to study as they were only in favour of religious education," Aziz told the daily. "But I vowed to provide my daughter quality education."

Suhai started her primary education at a private school in Tando Muhammad Khan and joined Bahria Foundation for her intermediate studies.

Her educational path then led her to pursue B.Com from the Zubaida Girls College, Hyderabad in Sindh province.

"My family wanted me to become a chartered accountant but I found the job to be very dull as it had no social value," she said. "That is when I appeared for CSS and cleared it in the first attempt."

She credited her success to hard work and her upbringing. "My parents are nationalists. As a child, they used to emphasise that I memorise Sindhi poetry.

This developed my interest in literature and history, leading me to secure top marks in both the subjects in the CSS (Central Superior Services) exams."