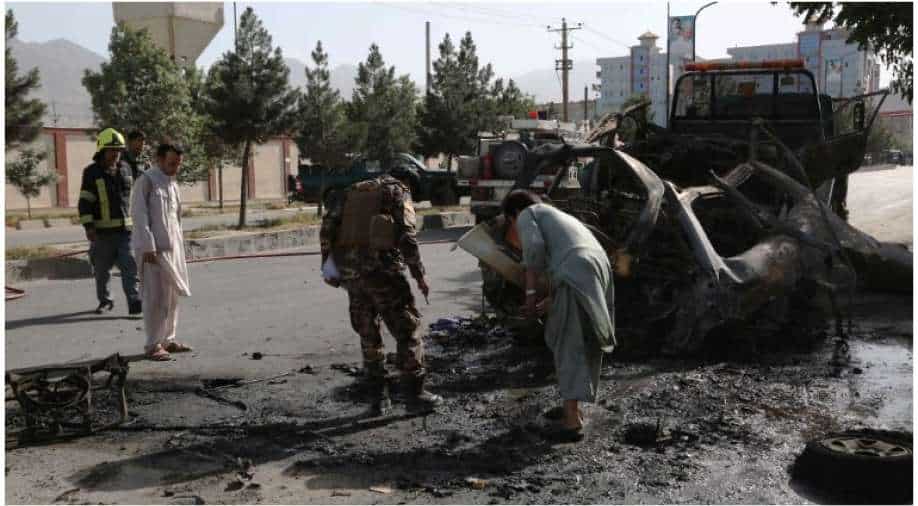 Afghan security forces inspect the remains of a vehicle at the site of a bomb blast in Kabul on June 12, 2021. Photograph:(AFP)
Follow Us

Afghanistan's capital Kabul was hit with a suicide attack on Tuesday as defence minister Bismillah Mohammadi said it was a suicide car bomb attack targeting his house.

After blasts hit Kabul, the United States said "it does bear all the hallmarks of the spate of Taliban attacks" even as US troops continue their pullout from the region.

A car bomb explosion had ripped Kabul on Tuesday including several blasts amid gunfire in the Afghan capital. At least four people were killed and 20 injured during the attack.

"It's important for the Taliban to recognise that it cannot achieve its objectives by seizing power through violence," State Department spokesman Ned Price said.

Taliban has stepped its attacks in the rural areas and provinces in Afghanistan for the past two months seizing several districts amid heavy fighting with Afghan troops.

"We're not in a position to attribute it officially just yet but of course it does bear all the hallmarks of the spate of Taliban attacks that we have seen in recent weeks," Ned Price said.

Reports say Herat is under siege by the Taliban as Afghan and US planes have carried out air raids even as the Taliban has continued to surge.

The talks in Doha have been deadlocked as the Taliban has made gains on the ground in Afghanistan.

US State Department spokesman Ned Price had recently said the militant group would become "international pariahs" if they gave up negotiations "and the concern on the part of all of us, one of the many concerns, is that the result will be civil war."

Ned Price said the US "unequivocally condemns the bombing" even as a security alert was sounded in the Afghan capital.

The UN Assistance Mission for Afghanistan (UNAMA) said it was deeply concerned for the Afghan civilians as fighting worsens while calling for an "immediate end to fighting in urban areas".