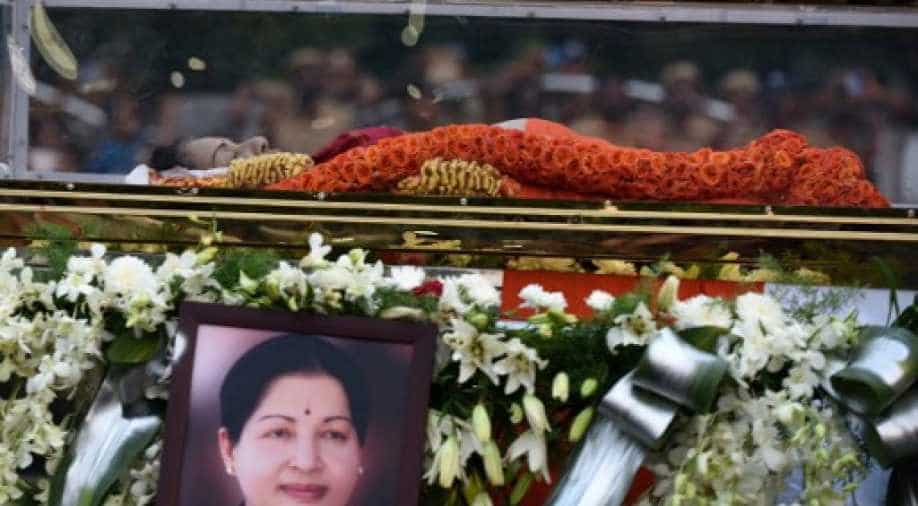 The mortal remains of Jayalalithaa Jayaram are carried during a procession to her burial place in Chennai on December 6, 2016. Photograph:( AFP )

The 68-year-old was laid to rest near her mentor and AIADMK founder M G Ramachandran's memorial.

Her body, dressed in her favourite green sari and draped in the national flag, was kept at the city's Rajaji Hall throughout the day for people to pay their last respects.

Tamil Nadu: Tributes being paid to #Jayalalithaa at Rajaji Hall in Chennai where her mortal remains have been kept pic.twitter.com/rQa8Xy1ykw

Her last journey started from Rajaji Hall for the Marina Beach on a military vehicle which was surrounded by thousands of wailing supporters.

Tamil Nadu chief minister O Panneerselvam, Jayalalithaa's close confidante Sasikala Natarajan and others were seated on the military truck that was towing the casket-laden carriage.

After the military honours, her body was transferred to a sandalwood coffin from the glass casket.

They put some sandalwood, flowers and other items on her coffin, before it was lowered into the grave.

Tributes have poured in for the former chief minister. Among them was one from her greatest rival, the DMK's K Karunanidhi who said her fame would remain forever.

The Indian government has declared a day of mourning and ordered all flags to fly at half mast.

The state of Tamil Nadu has declared seven days of mourning and said all schools and colleges will remain closed for three days.

Other states -- Kerala, Karnataka, Uttarakhand, and Bihar -- have also declared a day of mourning.

Jaya -- who was called Amma or Mother -- was treated like a demigod in her state. Television channels endlessly ran pictures of her ministers prostrating themselves at her feet.

When local television channels incorrectly reported her death on Monday evening, scuffles broke out at Chennai's Apollo Hospital where Jayalalithaa was admitted at the time.

Jaya died late Monday night. The hospital recorded the time of her death as 11.30 pm.

She had suffered a cardiac arrest the previous evening.

Jaya had been at Apollo Hospital since September 22 after she complained of fever and dehydration.

Security was reviewed in the state as soon as news of her cardiac arrest broke, with riot police being put on standby.