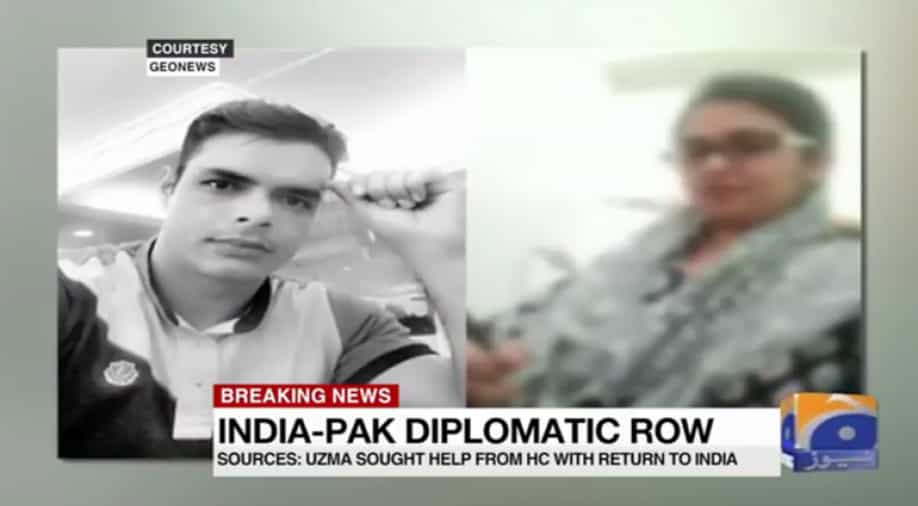 Uzma said she does not want to leave the Indian High Commission premises till she could safely travel back to India. Photograph:( WION )

A 20-year-old Indian woman, who approached the Indian High Commission here with a request to repatriate her, today alleged that she was forced to marry a Pakistani citizen at gunpoint, marking a new turn in the case.

Uzma filed a plea with an Islamabad court against her husband Tahir Ali alleging that she was being harassed and intimidated by him. She also recorded her statement before a magistrate.

Alleging that she was forced to marry Ali on gunpoint, she said: "My immigration documents were snatched", Geo News reported.

Uzma said she does not want to leave the Indian High Commission premises till she could safely travel back to India.

According to reports, Uzma's husband met her in the High Commission this morning but he was not present in the court.

The Pakistani High Commission in New Delhi said that the immigration documents state that Uzma obtained the visa under the visit category.

Pakistani authorities have said that the Indian citizen did not share her plans to marry in Pakistan when she applied for the visa and expressed her intent to visit her relatives in Pakistan.

An Indian woman named Uzma, married to a Pak national has sought help at the high commission to return home. She has now filed a case in a local court against her husband who allegedly cheated and threatened her (WION)

Uzma last week approached the Indian High Commission here with a request to repatriate her to India. But her husband, Ali, alleged that his wife had been detained by the mission.

Pakistan Foreign Office spokesman Nafees Zakaria yesterday said in a statement that "the Indian High Commission informed the Ministry of Foreign Affairs that an Indian national, Ms Uzma, 20, had approached them with the request to be repatriated to India."

Akaria said that according to the Indian High Commission, she claimed to have married Tahir and alleged that she later came to know that he was already married and has four children.

Government sources in New Delhi said the Indian woman has sought the help of the Indian mission in Islamabad on May 5.

The High Commission is providing necessary consular assistance to her and is in touch with the Pakistan Foreign Office on the matter and the girl's family in India, said the sources.

Uzma and Ali reportedly met in Malaysia and fell in love after which she travelled to Pakistan on May 1 via the Wagah border. Their 'nikah' was solemnised on May 3.

But the situation changed when they visited the Indian High Commission on Friday. Uzma went inside the building of the mission and did not return, according to her husband.

Tahir has filed a case with local police that she was detained against her will.