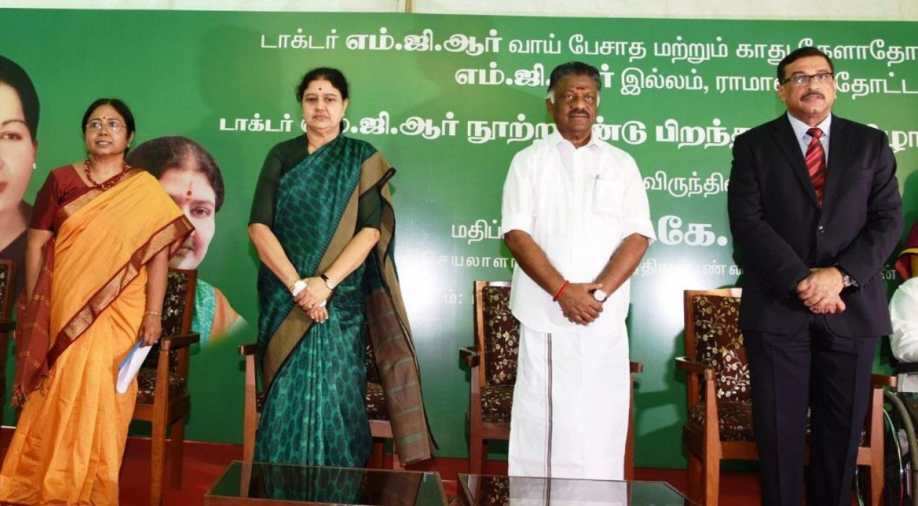 The AIADMK split after Panneerselvam -- who was appointed chief minister after Jayalalithaa's death -- alleged that he was forced to step down by Sasikala. Photograph:( Twitter )

Earlier, talking about Panneerselvam's "revolt" against her, the AIADMK general secretary said the "betrayal" will never win in the AIADMK and blamed arch rival DMK for trying to destabilise her from the party.

Sasikala hit out against former chief minister Panneerselvam, insisting that she had noticed "Panneerselvam joining hands with DMK following their conversation in the Assembly," and added that she felt duty bound to prevent the next course of action from happening, referring to a "revolt".

In a dramatic turn of events early Wednesday, the All India Anna Dravida Munnetra Kazhagam (AIADMK) had removed Tamil Nadu's interim chief minister Panneerselvam as the party's treasurer after he revolted against Sasikala and said that he was forced to resign as chief minister of the south Indian state.

Addressing the media outside his residence in Chennai, he said that he will prove his strength in the Assembly and also pledged to meet the people of Tamil Nadu in each and every city to prove his point.

If party cadres ask me to withdraw my resignation, I will do that: #OPanneerselvam pic.twitter.com/6Mw14Dez5n

I will meet the Governor once he is back here: #OPanneerselvam in Chennai pic.twitter.com/0i3PLwSYHU

I will prove my strength in the assembly: #OPanneerselvam in Chennai pic.twitter.com/5BnNdJIE5i

Panneerselvam has now been replaced by Dindigul Sreenivasan.

Panneerselvam, during a surprise visit at the burial site of the former chief minister J Jayalalithaa, had claimed that the state's revenue minister, RB Udhayakumar, had told him that Sasikala should take over as chief minister, ANI reported.

At a meeting at Sasikala's place senior party leaders were present&question of her being CM came.I asked how far was this justified: TN CM

Late Tuesday night, Panneerselvam made a surprise visit to Jayalalithaa's burial site at Marina beach. According to media reports, he reached the site at around 9 pm.

He then sat in meditation for the next 40 minutes. About half an hour later, he addressed the media gathered there, saying Amma's spirit had told him to clear the air, according to ANI.

Panneerselvam said, "There are some truths that I want to tell to my party cadre and to the people of this country. I have performed my duty without any shortcomings and carried forward path shown by Amma. When she (Jayalalithaa) was in the hospital, she asked me to take over as Chief Minister. I was told that I have to save the party and the state. I was given the post but was then insulted continuously,"

I was given the CM post but insulted continuously: TN CM O.Panneerselvam