India: Messages of concern sent to Bastar top cop after activist is threatened, reply is 'F u' 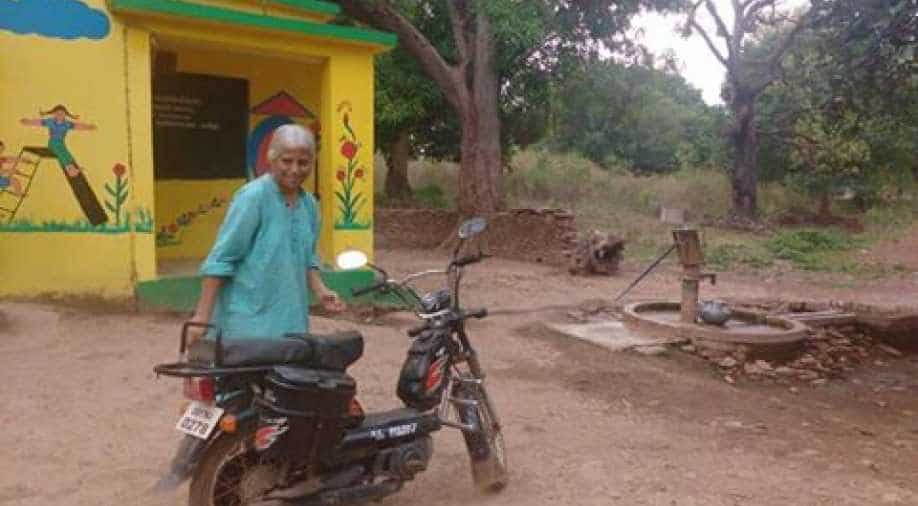 The messages of concern were sent to Mr Kalluri after some of a group of 30 men barged into independent researcher and human rights worker Bela Bhatia's home in Bastar in Chhattisgarh, threatened to burn it, and told her to leave within 24 hours. Photograph:( WION )

The independent researcher and human rights worker Bela Bhatia was woken early on Sunday morning -- the 23rd, at about 1.30 am -- by the sound of her dog Somari barking furiously.

That was followed by a loud banging on the door, made of tin and propped up with a bamboo stick, to the compound of her home in Parpa village on the outskirts of Jagdalpur, the district and divisional headquarters of Bastar district in Chhattisgarh.

"Come out on to the road," two men told her.

"No thank you," said Bela. "Come back tomorrow."

They did, on Monday. There were about 30 of them this time, says Bela.

Some of them walked into her home, after which they threatened to burn it down if she did not leave Bastar within 24 hours, and then made Bela and her landlady sign an undertaking that she would leave in a day.

The attacks on Bela came a few days after she had journeyed to the villages of Pedagellur and Bellam Nendra in Bijapur district to help women there testify to a visiting National Human Rights Commission (NHRC) team.

In October 2015 and January 2016, women from the two villages, and others, had allegedly been raped, and sexually and physically assaulted by personnel of the security forces. Bela had helped the assaulted women file FIRs (first information reports).

The NHRC team had come to collect the testimonies of the women they had not yet got.

Bela Bhatia at home in Bastar with her dog Somari. (WION)

The email and post urged anybody reading to call the officials, and demand Bela's safety.

One of the first people to call was Gayatri V. (Gayatri runs the NGO Bagheera which works with wastepickers in Kolkata, before which she worked with the UNHCR in Jordan.)

Gayatri called -- on Monday at about 9 pm -- one of the numbers given in the email and post to Mr Kalluri, the seniormost police officer in Bastar.

She says the phone was picked up and when she asked for him, handed to Mr Kalluri.

She asked about Bela.

"Yes, she (Bela) was attacked," Gayatri says Mr Kalluri said to her. "She was hurt," he added.

Gayatri says she was shocked. "Died?" she asked again.

"Haan, haan," she says Mr Kalluri said to her. After which he added, "I'm very sorry."

"Which hospital was she taken to?" Gayatri asked Mr Kalluri.

"I'm looking into it," she says he replied.

And then he cut the call.

But Bela was alive and well

None of what Mr Kalluri is alleged to have said was true.

Bela was not dead, she was alive and well, though presumably shaken by the two attacks on her.

In the meantime, the email and Facebook post had found traction. The messages to Mr Kalluri continued, and slowly devolved (on at least one side) into a repulsive war of words between concerned citizens and a senior police officer.

The Supreme Court lawyer and socio-political activist Pyoli Swatija says she messaged Mr Kalluri at about 11 am on Tuesday.

Her message read: "Please ensure that Bela Bhatia is not hounded out of her residence. The law of the land applies to Chhattisgarh too."

An hour later, she says she received this message: "Naxals will be kicked out of Bastar."

When Pyoli answered, "What has your answer to do with my query?", the reply she got was  "F u".

Another message to Mr Kalluri -- "This can't go (sic) long. You are not above the constitution. Don't sell your conscience for money" -- elicited the response: "Maoists and their dogs like you will be stoned out of Bastar. Beware."

Yet another message to Mr Kalluri (see photo below) --  "Do citizens of India not have the right to residence in Chhatisgarh?!" -- was met with the reply: "Yes, we are taking strong action. Very soon, Maoists and their dogs will be thrown out of Bastar."

The messages, and their replies, sent to Mr Kalluri. (Facebook)

The police version: 'I have no time for you'

When WION called Mr Kalluri -- on one of the four numbers given to Mr Kalluri in the original email and Facebook post -- he refused to answer any questions, instead saying: "You want to talk about Bela Bhatia, then I have no time for you."

Bela says she will be leaving her current home.

A little after the attacks on her, she says her landlady's husband and sons were called in for a talk with the police. And that, despite the fact that her landlord and landlady are not happy about it, she has decided to leave.

For now, she says, the district collector has offered to find her a home. "That will be temporary," she says. "I will find something else in the meantime."

The "pressure" on her, says Bela, had been building for some time.

In November last year, Bela says a "letter" reached the Parpa thana via the office of the superintendent of police saying residents of the village were upset with Bela, and that she should be looked at as a person of suspicion. Bela says the locals mentioned in the letter say they never wrote any such letter.

In January this year, another letter appeared, this time purporting to be from Bela herself. Bela says this letter complained (by her) about the illegal brewing (by the villagers) of liquor in Parpa.

The letters, she says, were probably trying to create a rift between the villagers of Parpa and Bela.

She also adds that she never wrote any such letter.

In October last year, uniformed personnel of the security forces burnt an effigy of her in Kondagaon. (This was a first. Whatever the Indian police's excesses, in Chhattisgarh and elsewhere, they have never been known to burn effigies of common citizens.)

There is no one left in Bastar

The "attacks" -- by the police --  on these common citizens have been "successful".

A few days prior, her home had been attacked at night. (Malini and her daughter were alone at home at the time.)

And just before that, a "demonstration" against her had been held by the citizens' vigilante group Samajik Ekta Manch. (An India Today television sting later seemed to prove the manch was created by the Bastar police.)

Isha Khandelwal of JagLAG says they left Jagdalpur at about the same time. (JagLAG now works out of Bilaspur, a 14-hour drive away.)

In Malini's case -- whom JagLAG represented -- she said Malini's maid was held by the police.

In JagLAG's case, their landlord's car was confiscated. Their landlord was a taxi driver, and his livelihood depended on the car.

"It was only when we agreed to leave Bastar that the police let Malini's maid go, and released our landlord's car," she says.

Exactly the same sort of pressure, it seems, is being brought to bear on Bela.

The common link between all these people is that they offered (or offer) a narrative that was different from the one the government of Chhattisgarh or the police administration of Bastar has to tell -- Kumar was raising human rights violations by the police and the Salwa Judum (the civilian militia raised by the state in Chhattisgarh), the lawyers of JagLAG were representing the families of men and women murdered in extra-judicial killings, the victims of rape and sexual assault by personnel of the security forces, and the (largely) tribal men and women falsely accused on charges of Naxalism, Malini Subramaniam was reporting and continues to report on police excesses in the region, and Bela Bhatia is helping women who say they have been raped and assaulted by personnel of the security forces file FIRs against their attackers.

There have, in recent months, been myriad reports -- corroborated by the Press Council of India -- about Bastar turning into a media black hole.

No news comes out of there, because nobody is left there to tell a story different from the one the police tells us.