India Army vs Pakistan Army: How two military forces stack up against each other 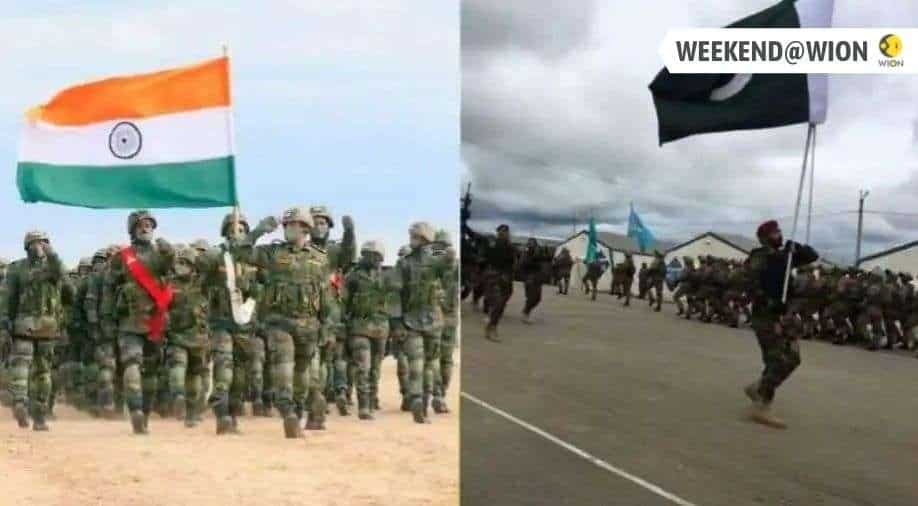 (Left) Soldiers of the Indian Army and (right) troops of the Pakistan Army. Photograph:(Twitter)
Follow Us

In terms of border security and international territorial dispute, India and Pakistan are two neighbours that are part of one of the world's most dangerous areas

Tensions and fears of a significant military conflict between nuclear-armed neighbours India and Pakistan remain high, with continuous ceasefire violations by Pakistan in Kashmir and a heightened danger of terrorist activities by Pakistan-based terrorist organisations.

The transfer of Islamist forces and proxy organisations from Afghanistan to Kashmir threatens to exacerbate border conflict.

Also read | How is the tea? Internet wonders if India trolled Pakistan by giving tea to captured terrorist

In the last seventy years, the two armies have battled four times.

In the current scenario, there is a red line somewhere, albeit a hypothetical one, that if crossed might lead to war.

According to the most recent study from Global Firepower Ranking, the military might of India and Pakistan is completely unmatched.

In terms of the total power index, India is only behind the United States, Russia, and China, while Pakistan is far behind in 10th place.

This is how their militaries compare:

Pakistan lags considerably below India's military might on every metric, including land, air, and sea.

In comparison to the Indian military, Pakistan has just half the personnel. Pakistan cannot compete with India in terms of battle tanks or other munitions.

Being 'aggressive' was Pakistan's way of life — their arrogance led to a series of blundering miscalculations, a series of humiliating setbacks, and the gradual realisation that their war machine was not as effective as they believed it was.

The feeling of shame leads to bad behaviour and immoral types of combat, one of which is terrorism. Pakistan is currently unclear about how to defend its land, so it is creating religious mercenaries with barbaric beliefs in order to achieve an impossible objective.

The Pakistan Army has repeatedly humiliated its people while maintaining control over them by denying them education and keeping them religiously enslaved.