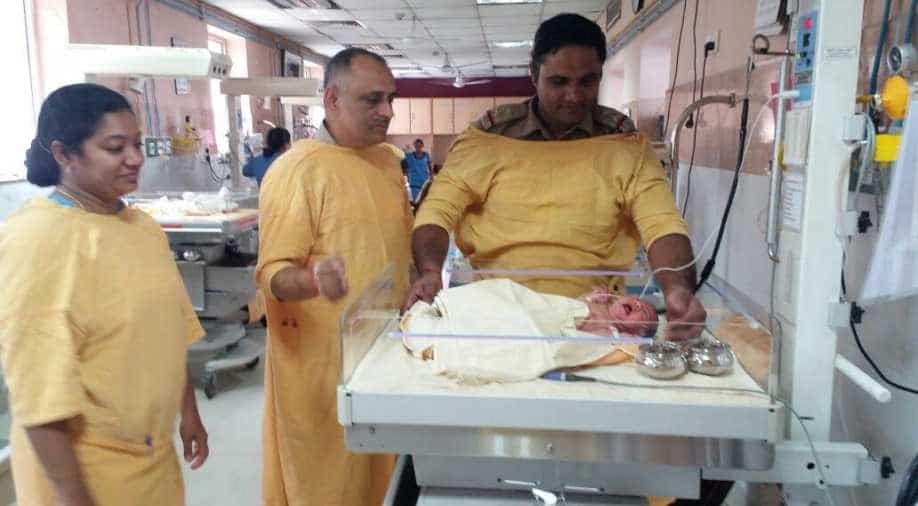 Cops and hospital staff at Delhi's AIIMS hospital treat Swadha as one of their own. Photograph:( WION )

Last week, a night patrol team of Delhi Police received a call about a baby lying in a plastic bag under the Munirka flyover in the RK Puram locality of the city.

The policemen reached the spot, not far from the Munirka bus stop where a 23-year-old paramedical student was gangraped on the fateful night of December 16 in 2012. The incident had sent shockwaves across India.

The baby was immediately taken to the All India Institute of Medical Sciences (AIIMS) by Somnath Paruthi, the station house officer (SHO) of the RK Puram police station and his team.

The doctors at AIIMS told Paruthi that she was only two days old. Upon examination, they affirmed the baby girl was healthy with no injuries or infection.

Paruthi and his team bought her formula food, some warm clothes and made sure three of their women colleagues were on duty at the neo-natal intensive care unit.

The Delhi police found her wrapped in a plastic bag under the Munrika flyover. She was admitted to the All India Institute of Medical Sciences (AIIMS) hospital and was declared healthy by doctors. The police named her 'Swadha' or 'divine approval'. (WION)

The chance spotting of the baby and her miraculous survival on a Delhi pavement prompted the Delhi police to name her 'Swadha', which means 'divine approval' in Sanskrit. But in medico-legal parlance, Swadha is referred to as "baby unknown".

Even as the police have registered a case and are trying to trace the baby's family, the doctors and nurses looking after Swadha treat her as one of their own. The nurses dote on her, feeding her formula food with a vessel.

"We receive four to five cases of abandoned infants every year," says Vinod Paul, head of the pediatrics department at AIIMS.

"We're happy to look after them," he adds.

The western Indian state of Maharashtra has seen the highest number of cases of abandonment of newborn babies. A total of 1,093 cases were registered between 2011 and 2015.

Preference for sons in many Indian families means that most of the abandoned newborns are girls.

Official statistics reveal that a large number of orphaned children are waiting for homes. In 2015, only 3,011 such children were adopted by Indian parents, according to the Central Adoption Resource Authority (CARA).

Meanwhile, police are getting calls from couples hoping to adopt Swadha. AIIMS will subsequently hand over the baby to the child welfare committee.

"We're the bridge between police and a home for Swadha," says Dr Paul.