In Conversation with Gulzar 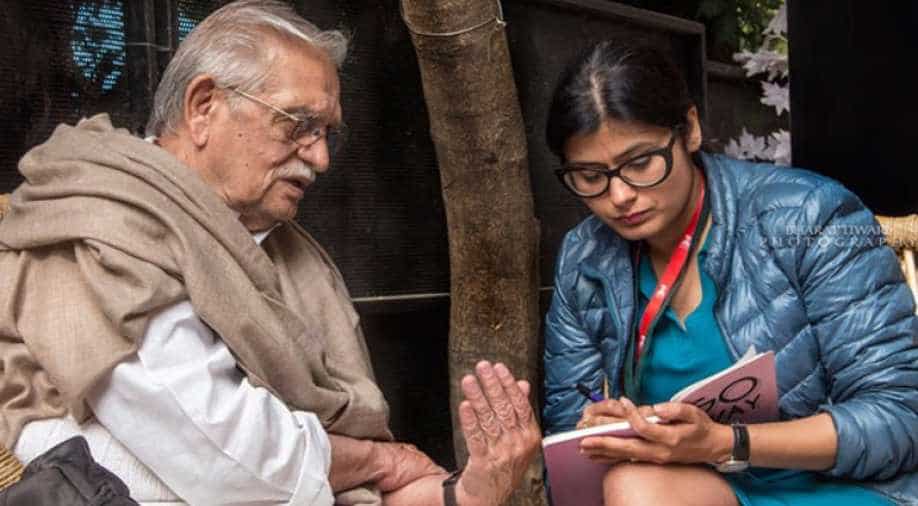 Gulzar recently paid tribute to Tagore by translating more than 60 poems of the Nobel laureate from Bengali to Hindi. (Image source: Bharat Tiwari) Photograph:( Others )

Gulzar, the poet of love and endearment in all its forms, can be a frustratingly elusive interviewee. This leisurely chat with him one winter morning was facilitated through nothing less than divine intervention. When I shared with Gulzar that Yudhisthir and Draupadi by Pavan K Verma is one of my favourite books of contemporary poetry, he responded with a pertinent question, “Why is it not a part of the English Literature curriculum at our schools and universities?” That set the ball rolling for an hour long conversation that resonated with the rhythm of his poetry.

“If we can teach Milton’s Paradise Lost about Adam and Eve, why can’t we teach poems about Yudhisthir and Draupadi?” This rhetorical question laced with angst leads to a mellower thought on western poetry, “I have nothing against Shakespeare or Milton. But till how long can we go on studying and teaching Julius Caesar?” I share with him that universities have begun to revise their curricula and there is a much greater representation of Indian writers than ever before in English Literature syllabi. He beams. “You mean they are now teaching Faiz and Firaq? And what about Manto?” My affirmative nodding brings a beatific smile to his face.

He begins to talk about Rabindranath Tagore. “All of us need to read Tagore. If his poetry is inaccessible to some, it is worthwhile to translate it not only from one language to another but also in terms of register. Tagore’s works should be taught at the school level and not just the most well known ones.” As an afterthought he says, “Poetry is not for textbooks. It is for and about the lived experience. The language of our everyday business is the language of poetry."

On the Labour of Translation

Gulzar recently paid tribute to Tagore by translating more than 60 poems of the Nobel laureate from Bengali to Hindi. He also teamed up with singer Shreya Ghoshal for ‘In Conversation with Tagore’ a seven track music album of Tagore’s translated poems.

“My latest translation project ‘A Poem a Day’ aims at amplifying the voice of young and dynamic poets writing in different languages and dialects from across the country. I have already finished translating 272 poems from 32 languages,” he beams while sharing. “I’m fascinated by the sheer dynamism of poetry coming from different parts of the country, especially the North Eastern states. I think today the North Eastern poets stand a class apart from others,” he says.

When it comes to languages, does he have any favourites?

“I love the sound of Malayalam. It is music to my ears. I don’t understand it well but I love it. Bengali comes naturally to me because of my childhood years in Kolkata. Because of Bengali I also understand Oriya and Assamese in some measure,” he says.

And poets? Millions revere Gulzar’s poetry, who does he revere?

The answer comes easily, “Jayant Mahapatra.” Playing on the poet’s first name he exclaims, “He’s a ‘Giant’ of a poet!” While taking Mahapatra’s name, Gulzar touches his ears ritualistically and it instantly establishes the guru-shishya relationship between the two poets. “Once he mailed a short story to me. Like a teacher he recommended that I read it,” he shares.

Talking of translation and poets of Bengal and Orissa, the welcome inevitability of Jibananada Das’s name presented itself. “Jibanananda Das is one of the most difficult poets to comprehend and translate. Most modern amongst his contemporaries, most unusual! The intricacies of his poetry cannot be replicated,” he shares. Gulzar has written ‘Mone Pode,’ a poem, celebrating Das’s life and poetry.

As a poet and translator, Gulzar has several quirky lessons for budding translators. The first being falling in love with a person speaking the language one intends to learn. “Nothing teaches language better than love. Imbibe as much as you can. Learn the intricacies of the language,” he says.

When I share that the first words and phrases we acquire in a new language are usually the terms of endearment or expletives, he lets out a hearty laugh before embarking upon a discourse on gaalis. “Most interesting abuses are there in Punjabi. They don’t hurt. There is a concept of farmaishi gaali (abuse on demand) in Punjabi,” he says smiling. “Bangla has no abuses. Bengalis use Hindustani when they want to abuse,” he shares a couple of expressions of Bengali rage.

Maybe the Bengalis do not want to spoil the lexicon of their language.

“It is a characteristic of urban culture. When we want to abuse, we borrow words and phrases from another language. Perhaps this is our way of retaining respectability,” he muses.

Does Gulzar have a language and a script for his thoughts?

“There’s no script in thinking. I don’t think in a script. My thoughts become a script later on,” he says.

The conversation veers towards films and scripts at this point.

Gulzar is a winner of Dadasaheb Phalke Award, several Indian National Film Awards, 20 Filmfare Awards, one Academy Award, and one Grammy Award for imbuing cinema with the grace of his words. He has written stories, songs, screenplays and dialogues for more than a hundred films. He has also directed some of them.

“Poetry is part of a film. You can’t separate it. The challenge is to convey the characters’ thoughts in the language that they understand. High poetry in my film songs mostly belong to the dream sequences,” says Gulzar. “The challenge is also to convey the flavour of the region that the characters come from,” he adds. “In the recently released ‘Ok Jaanu’ Naseeruddin Shah’s character’s Hindi is different from that of his wife. The former’s language bears the mark of his years spent in Lucknow. That needed to be conveyed.”

Gulzar is a champion of experiments in language and form, be it in poetry or cinema. Like all great experimenters, he acknowledges that the avant garde does not work all the time. Talking of ‘Mirzya’, a much hyped film in 2016 that tanked and drew much criticism, he recognises the shortcomings of the screenplay he wrote. “Mirzya was conceptualised as a ballet opera on screen. There was the narrator-chorus structure which clearly did not work for cinema. Perhaps, I failed as a screenplay writer,” he says without any rancour.

Gulzar did not want the interview to end and this is clearly one of the most flattering and humbling experiences for any interviewer. When I put my pen down, there was a casual exchange on people we knew in common, mostly academics and poets. Poetry of this conversation was invaded by the pressing needs of the business of living. There was lunch waiting for his attention, along with some hungry friends.