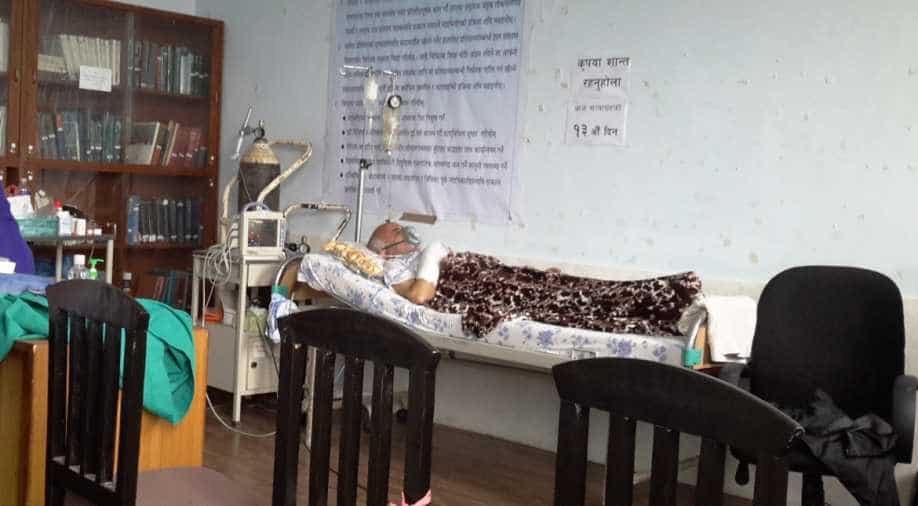 Nepal has only seven doctors, nurses and midwives, and 50 hospital beds, for every 10,000 people, according to the World Health Organisation?.?In photo: Dr Govinda KC. Photograph:( Others )

Dr Govinda KC spent 22 days lying on a gurney in a hospital in Nepal's capital Kathmandu, but he was not a patient. The orthopaedic surgeon was on hunger strike.

Dr KC has gone on hunger strike 10 times over the past four years in an attempt to pressure the government to improve healthcare in the impoverished Himalayan nation -- and he is sure he will have to strike again.

Nepal's limited health sector was further strained after the devastating 2015 earthquake, which damaged nearly a third of public clinics and hospitals

"The hospitals and medical institutions, they don't have proper infrastructure. They don't have adequate manpower, adequate equipment," said Dr KC from a hospital bed where he is recovering from his latest fast.

Nepal -- a country of 28 million people -- has only seven doctors, nurses and midwives, and 50 hospital beds, for every 10,000 people, according to the World Health Organization.

The WHO recommends at least 34.5 skilled healthcare professionals per 10,000 people.

The limited health sector was further strained after the devastating 2015 earthquake, which damaged nearly a third of public clinics and hospitals.

More than 80 percent of the population live in rural areas, reliant on rudimentary state-run clinics, while hospitals are concentrated in cities -- and are mostly private.

"Private health care is linked to higher out-of-pocket payments, which leads to more people being impoverished as a result of health care," said Jos Vandelaer, country director for the WHO in Nepal.

"You have one liver problem and you are back into poverty," he said.

Something of a medical Robin Hood, Dr KC, 60, is well known in Nepal for his philanthropic work, travelling to some of the country's most remote communities to provide medical care and train local health workers.

He lives in doctors' quarters at the back of the hospitals where he works and spends less than a third of his salary on himself, using most of it to buy drugs and basic equipment for his clinics. His only luxury is a 20-year-old television.

He has travelled alone to help out in disaster zones around the world, offering his services to local hospitals in Haiti following the 2010 earthquake and the Philippines after Typhoon Haiyan.

Nepal has been plagued by political instability since it transformed from a Hindu monarchy to a federal state in 2008, two years after the end of the bloody decade-long Maoist insurgency.

The revolving door politics has seen competing parties seek to retain influence by stacking loyalists within the bureaucratic structures -- including in the health sector.

A new constitution agreed last year included a pledge for universal healthcare, but the charter is yet to be implemented.

Private hospitals and medical colleges have mushroomed, filling a hole left by the limited government-run health sector, and often owned by the politically well-connected.

"It is supposed to be a service-orientated sector, but it has turned to be [a] profit making sector for the political parties, for the politicians themselves," said Dr KC.

Top of Dr KC's demands is an end to the political meddling that he says is putting business interests ahead of developing public health services.

Training is particularly contentious, dominated by fee-based medical schools which critics say lack basic facilities and enrol too many students each year.

"There is no commercialization of the medical education sector in the big developed countries, whereas in our country it is so rampantly commercialised," said Dr KC, who trained in Bangladesh with residencies in Britain and Switzerland.

Health minister Thapa said at least six members of the government's advisory health committee, which has consistently blocked the passing of a medical education bill to regulate doctor training, had links to private medical colleges.

The bill was one of the main demands Dr KC made in his latest strike, his longest yet, which ended in early December after he reached an agreement with the government.

But the surgeon and his supporters have little confidence things will change quickly.

"This is the tenth time that Dr Govinda KC has been in hunger strike, that means there has been nine times the agreement has been broken," said Dr Lijan Maharjan, part of his negotiating team.

Lying on a hospital bed, a woollen hat pulled down low against the cold, Dr KC appeared resigned to another strike.