Hundreds of Rohingyas flee to Bangladesh as violence spreads in Myanmar 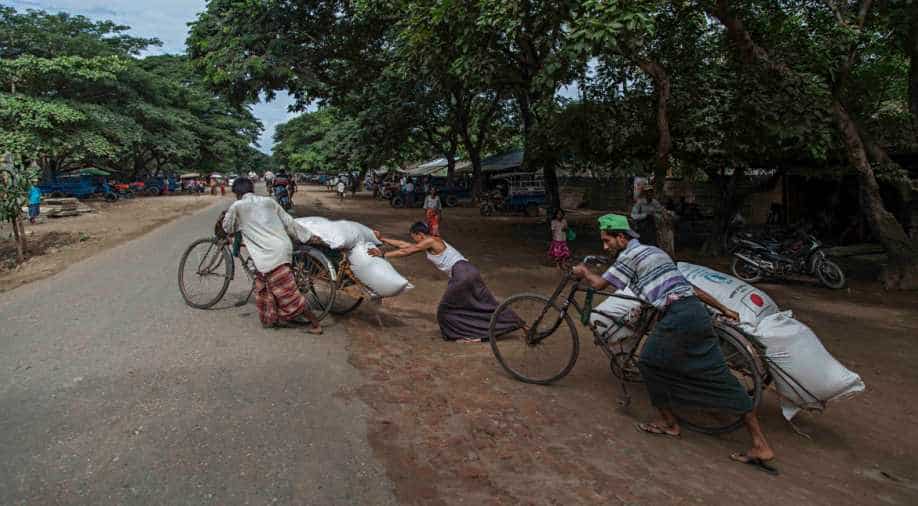 UN?agencies have not given specific numbers of fleeing Rohingyas, but aid workers told Reuters hundreds crossed the border to Bangladesh over the weekend and on Monday. Photograph:( Getty )

Hundreds of Rohingya Muslims from Myanmar fled into neighbouring Bangladesh this week in a bid to escape the violence that has killed at least 86 people and displaced about 30,000 people in recent fighting.

Without specifying the exact number, UN aid workers told Reuters hundreds crossed the border to Bangladesh over the weekend and on Monday.

Some are feared to have drowned after their boat sank in a river while crossing the river Naaf that separates Myanmar and Bangladesh, Reuters reported. Those who managed to enter Bangladesh sought shelter in refugee camps or people's homes.

"There was a group of people from our village who crossed the river by boat to come here, but suddenly the boat sank," said Humayun Kabir, the father of three children untraceable since the mishap.

He also said that though many of the refugees swam to the river bank, seven people are still bmissing -- his children among them.

The violence in Myanmar  poses the biggest challenge yet for the eight-month-old administration of Nobel Peace Prize winner Aung San Suu Kyi.

It is the most serious after 2012's communal clashes in Rakhine that killed hundreds of people.

Soldiers have flooded the area along Myanmar's frontier with Bangladesh in response to coordinated attacks on three border posts on October 9 that killed nine police officers, Reuters reported.

Myanmar's military and the government have rejected allegations by residents and rights groups that soldiers have raped Rohingya women, burnt houses and killed civilians during the military operation in Rakhine.

Sirajul Islam, who arrived on Monday at an unregistered camp in Bangladesh's southern coastal town of Teknaf, said he did not know what happened to his eight-member family after soldiers set fire to their home in Rakhine.

"I don't know where my wife and children are," Islam said. "I somehow was able to cross the border to save my life."

The area -- mostly home to the Rohingya community -- is under military lockdown. A humanitarian effort to provide aid to more than 150,000 people has been suspended for more than 40 days in the area, Reuters reported.

"Difficult as it is for the Bangladesh government to absorb large numbers, it seems to me there is no other choice, because the only other choice is death and suffering," John McKissick, head of the UN High Commissioner for Refugees office in the southern resort town of Cox's Bazar told Reuters. "For now, the only thing that can be done is to assist and protect them."

Mynamar's 1.1 million Rohingyas are viewed as illegal immigrants from Bangladesh by many people in the Buddhist-majority country.

(WION with inputs of Reuters)