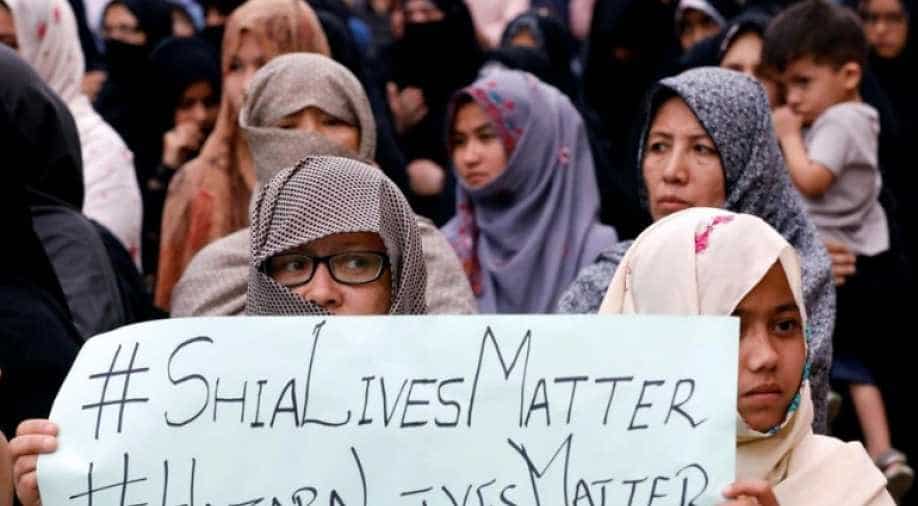 Pakistani Shia supporters of Imamia Students Organization (ISO) hold a sign to condemn the Friday's blast at a vegetable market in Quetta, during a protest in Karachi, Pakistan April 14, 2019. Photograph:( Reuters )

Hazaras have been frequently targeted by Taliban and Islamic State.militants and other Sunni Muslim militant groups in both Pakistan and Afghanistan.

Minority Shia Hazaras blocked traffic in a sit-in protest for a third day in the southwestern Pakistani city of Quetta on Sunday after a suicide bomb killed 19 people in an outdoor market, many of them ethnic Hazaras.

Dozens were wounded in the blast on Friday on the outskirts of Quetta, capital of resource-rich Baluchistan.province, officials said. Islamic State claimed responsibility.

Hazaras have been frequently targeted by Taliban and Islamic State.militants and other Sunni Muslim militant groups in both Pakistan and Afghanistan.

"We've lost hundreds of our loved ones in the last 10 years," Tahir Hazara, leading the sit-in, told Reuters. "The government failed to protect our community. Terrorists are free to target us." "Stop killing Hazaras," the crowd chanted. "Down with terrorism and sectarianism."

The protesters, who include many women and children, have set up camps and burn wood to keep warm at night. One police official said there were about 200 people taking part on Sunday, blocking the key arterial Western Bypass leading into Quetta. About 50 Hazaras gathered in the southern city of Karachi, some holding signs saying "Shia lives matter".

The LeJ has worked both with al Qaeda and Islamic State in Pakistan and has claimed several coordinated attacks in Baluchistan against what it terms Shia heretics. In 2013, three bombings killed more than 200 people in Hazara neighbourhoods, prompting security forces to escort Hazara buses to the market. The same practice was followed on Friday, but the bomb exploded inside the market.