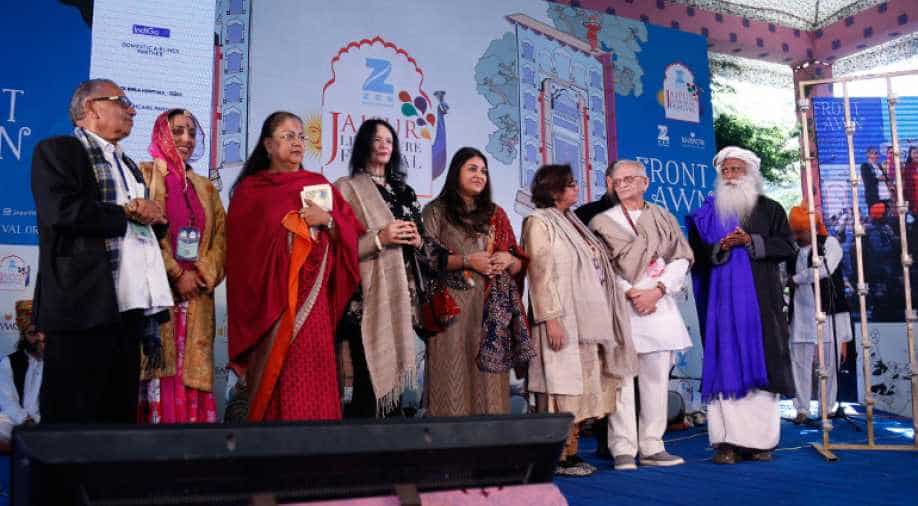 “Donald Trump is not my idea of a joke,” said the legendary playwright and screenwriter Sir David Hare at the 10th edition of Zee Jaipur Literature Festival (JLF). His statement set the tone for the festival, an annual juggernaut of the global literary world. Zee JLF was inaugurated at Diggi Palace in Jaipur by the chief minister of Rajasthan, Vasundhara Raje Scindia on 19th January.

The entrance to Diggi Palace was lined with tributes to the world of literature and arts in the form of installations, live music and dance performances, and digital broadcasts on big TV screens. A primer of sorts for the participants on the upcoming five days of the festival. The first day of Zee JLF began with a ceremonial play of drums and horns by Rajasthani folk musicians led by Nathoo Lal Solanki. After their rousing performance, the award-winning Shillong Chamber Choir came onstage with poetic keynotes delivered by two stalwarts, Gulzar and Anne Waldman, in keeping with the festival’s ‘East meets the West’ ethos. Waldman’s animated recitation with its outro insisting upon pushing back the darkness enthralled the jam-packed front lawns.

The first day saw engaging discussions on a variety of issues ranging from yoga to Brexit, from China’s one-child policy to intersections of theatre and cinema, from Sanskrit in the Mughal courts to reporting from conflict areas, and several others. When Sir David Hare said that he found out his gift of writing only accidentally, the audience gasped in disbelief. There was a roar from the audience when Nassim Nicholas Taleb, polymath author of Black Swan and Anti-Fragile, said, “People are fed up with serial incompetence. There is a rebellion against the expert problem." Sadhguru of the Isha Foundation pondered on the existential crisis faced by humanity and said, "Human intellect is firing like never before. This is why people are suffering. They have to think for themselves, not rely on scripture or a guru."

One of the highlights of the festival this year is that it is 100% cashless, in keeping with the Indian government’s thrust on going digital. The book store, the merchandise, crafts bazaar, and the eateries at the festival venue accept payments only through the participant ID cards which can be recharged with desired amount of money. Many festival goers, however, have complained of inconvenience owing to technical glitches. Some foreign visitors were annoyed that their cards were not accepted and there was a cap on currency exchange. Though, vendors and organisers have assured that systems will work smoothly during the next four days.

After the pack-up at Diggi Palace, the festival moved to Clarks Amer for the music stage. Each year artistes from across the world come to perform at the festival. Every evening of the festival there is an eclectic mix of song, dance, and instrumental performances. Rajasthan's Josh and Neeraj Arya’s Kabir Café enthralled the audience with their fusion music.