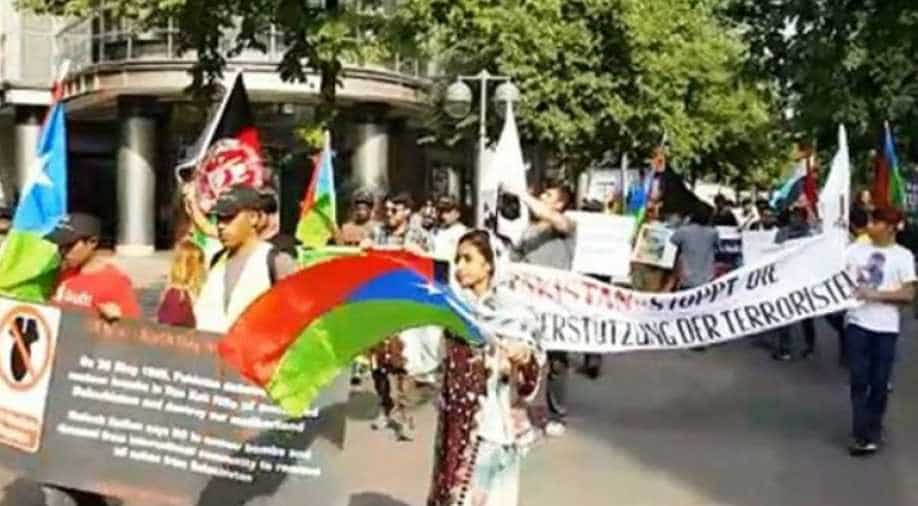 Marking the "Black Day" in Balochistan, the members of Free Balochistan Movement (FBM) on Monday organised simultaneous protests, rallies and awareness campaigns in different parts of the world.

The protests were held in UK, Germany, Austria, The Netherlands, Canada, Norway and Sweden.

The protesters highlighted the consequences faced by the people of Balochistan 20 year safter the nuclear test were conducted in Balochistan.

The people protested with large banners and placards inscribed with pictures and slogans of peopl eaffected by the tests.

The activists also distributed leaflets and explained the situation to the locals of the area.

They also got support and sympathy from the local people.

A leader of the Free Balochistan Movement claimed that Pakistan tested its nuclear weapons in the heart of Balochistan's Chaghai district without the will and consent of the Baloch nation.

He added, "The residual radiation impact resulting from the blasts in Raskoh mountain range have caused diseases like lung, liver, and blood cancer, skin diseases, typhoid, and infectious hepatitis, as well as serious effects on the nervous system, blood pressure, eyes, and throats, and on newborn babies."

He said on May 17, 1998, he warned that "weapons being tested in the name of the country's defence will prove to be a message of death for the people of Baluchistan. The droughts, increasing illness and continued suffering of the residents of Chaghai and surrounding districts are a reflection of our concerns in 1998."

"The civilised world remained silent on Pakistan's crime against the Baloch nation and Balochistan. They stood by with their lips sealed as Balochistan was burning before their eyes. Today, we as a nation continue to suffer the aftermath of Pakistan's nuclear weapons. Iran is also planning to make nuclear weapons and we have concerns that they will follow Pakistan's path and conduct its nuclear tests in occupied Balochistan," he added.

His statement further read, "We urge the world community, IAEA, and other international bodies to take notice of the effects of Pakistan's nuclear weapons in Balochistan. Nuclear experts should visit the region where nuclear bombs were detonated to investigate the causes of diseases that local people are suffering and remove all nuclear materials from Balochistan to save human lives and protect our precious environment."

"We also remind the world that Pakistan is an irresponsible state and its corrupt military institutions and politicians can do anything for money. That is why it is a possibility that the wealthy religious extremist will acquire nuclear weapons from Pakistan and use them against Western democracies. Hence, the world must make every effort to denuclearise Pakistan and strip it of its nuclear weapons before it is too late," the statement read.

Sami Baloch, an activist of Free Baloch Movement from Washington DC, urged the US government and people to stop supporting Pakistan as Pakistan supports ISIS, Taliban and other terrorist groups that are threat to world peace. He also said that Pakistan's nuclear weapons should be monitored because of the presence of religious groups in that country.

Five nuclear tests were conducted by Pakistan in Chagai area of Balochistan in 1998.

The test was carried out immediately after India conducted its successful nuclear test at Pokhran on May 11 and 13, 1998.

Each year May 28 is celebrated by Pakistan as "the day of greatness" to mark the country's successful detonation of the nuclear device.

The people of Balochistan's Chagai, however, observe it as "Black Day".